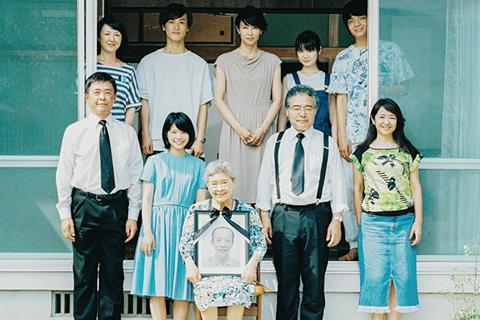 Dubbed an updating of Juzo Itami’s The Funeral, Goodbye, Grandpa!’s bereavement-focused antics needn’t look to Japanese cinema history for a point of reference. In telling the tale of an eclectic family brought together by the death of their patriarch, the film steps into the shoes of countless similar dramas — and offers little to distinguish itself from most of them. Debut feature director Yukihiro Morigaki does bring a fine cast on this familiar journey, however, with empathetic performances the highlight of the otherwise routine Tokyo Film Festival-bowing effort.

A Japanese release in early November will follow, but reception elsewhere is likely to be muted. Though steeped in specific Japanese funerary, mourning rituals and reactions, that’s not enough to give Yamazaki Sahoko’s first script a unique perspective, or even a significant point of interest. So although though there’s undemanding, occasionally amusing entertainment within the film’s frames, its prospects of travelling elsewhere are uncertain at best.

Twenty-something Yoshiko (Yukino Kishii) is having sex when the phone rings with the bad news: her grandfather (Yutaka Gobuichi) has passed away in hospital —  not that her boyfriend (Takumi Matsuzawa) thinks it warrants a pause in their perfunctory lovemaking. From her tenure-obsessed, college student brother Kenta (Keita Ikemoto) to her disparate younger cousins — rebellious high-schooler Chiharu (Karin Ono) and the reclusive Yohei (Amane Okayama) — to her just-retired father Kujiji (Ken Mitsuishi), everyone else reacts much the same way. With the entire family deeming the death an inconvenience, and grandmother Hull (Hisako Okata) afflicted with dementia, “isn’t anyone sad that grandpa died?” Yoshiko is left wondering aloud.

The short answer is that they’re all too wrapped up in their own problems, some crucial, some trivial, to spend more than a cursory amount of time contemplating their loss. Yet the more they’re bundled together in close confines at the family farm, with Kujiji’s bickering with his older brother (Ryo Iwamatsu) and life-long envy towards his successful sister (Miki Mizuno) just two examples of the dysfunction they’re all saddled with, the more they eventually come to appreciate just what lies behind the bonds of blood.

While the details could be taken from any number of narratively comparable efforts, encompassing arguments, resentment, estrangement, senility, generational differences, martial troubles and struggling with existential malaise — with some occasional, well-meaning magical realism thrown in as well — the nuanced Kishii leads an ensemble ready, willing and able to invest depth into their characters. She’s especially impressive, her wise-beyond-her-years demeanour helping to flesh out a protagonist largely tasked with observing everyone around her. That’s not to say that her co-stars don’t do their best with their stock-standard parts, or sell the kooky family dynamic.

Ultimately, spending 101 minutes in their company takes audiences down the opposite path to its characters; there’s nothing to protest or overly grate, but there’s no huge revelations waiting in store either. In keeping with the light, warm tone that suits the mood, cinematographer Keisuke Imamura lenses the feature’s visuals in realistically sunny hues — befitting a film that’s amiable and affectionate in its adherence to a template, but far from glimmering.