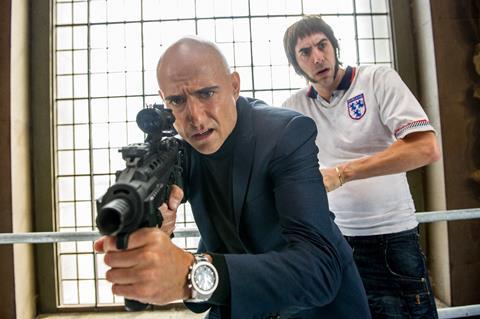 Sacha Baron Cohen didn’t become a household name by pulling his punches. While his latest subversion Grimsby is ostensibly a routinely lowbrow British comedy, it’s also a something of stealth device to test the waters as to how far down he can bottom-feed. The answer is: deep. Grimsby is unflinchingly dirty as Baron Cohen mucks around with Little Britain’s class war and its Benefits Street ‘welfare scum’.

While Grimsby is an equal opportunity offender, the Lincolnshire port town itself possibly comes off the sodden worst

Baron Cohen adopts the up-North, Liam Gallagher-gone-to-seed persona of Nobby, a pot-bellied chav from the Lincolnshire town of Grimsby (the film has been re-titled The Brothers Grimsby by studio Sony for its North American release, an indication of the significance the down-at-heel city holds on the world stage). And while Nobby is nowhere near as ingenious or sharp as Ali G or Borat, Grimsby is nonetheless in a league of its own when it comes to audaciously filthy gags. Targets include Daniel Radcliffe, AIDS, Donald Trump, wheelchair-bound child Middle East peace activists, and the extreme nether-regions of brotherly love. You’ll never look at an elephant again in the same way.

Commercial potential is heavily reliant on word of mouth; Baron Cohen will need to market Nobby hard to reach The Inbetweeners crowd in the UK and Ireland, and he’ll be hampered by the fact that while the film can be funny, Nobby himself is a little dull-witted. The gags may work on the international stage – a firework up the backside looks the same in all languages – but the British working class milieu may feel foreign. Rebel Wilson and Penelope Cruz give Grimsby some much-needed sparkle (as well as the Australian and Spanish markets), and full marks go to Mark Strong, last seen onscreen in Kingsmen, for being an exceptionally good sport as Nobby’s long-lost posh sibling Sebastian.

Baron Cohen has opted for the high concept of mismatched brothers in Grimsby - benefits cheat Nobby being related to MI5’s top assassin Sebastian isn’t such a visual gag as Arnold Schwarzenegger and Danny DeVito in Twins almost 30 years ago, but it’s still effective as a comic shortcut. Nobby, the pot-bellied uxurious husband of Rebel Wilson and dad to nine snag-toothed tykes including Django Unchained, is happy with his life in Grimsby, although constantly pines for Sebastian, the brother he lost 28 years ago.

While Grimsby is an equal opportunity offender, the Lincolnshire port town itself possibly comes off the sodden worst, gleefully down-at-heel thanks to Kave Quinn’s mischievous production design (she doesn’t have quite so much fun when the production moves to South Africa at around the half-way mark). Nobby spends much of his time in the pub watching England games with shirtless, overweight, drunken locals (credits include ‘Fat Grimsby Lass’ and ‘Fat Chav’). Baron Cohen may look at England’s prejudices, but it’s a soft, affectionate leer through beer-goggles with British comic staples such as Ricky Tomlinson and Johnny Vegas in the scrum.

The mean streets of Grimsby are contrasted with the life of the James Bond-like Strong, although Sebastian only has a job, and Isla Fisher as a 24-style Chloe, to really call his own. Baron Cohen, working with writers Phil Johnston and Peter Baynham, lets the contrast between the brothers to do far too much of the talking, until the film’s filthy gags start to build up their own momentum. As Nobby, the actor-comedian delivers a weaving Lincolnshire accent and a heart-of-gold idiot against Strong’s resolute straight guy.

Director Louis Leterrier, behind Now You See Me and the first two Transporter films, delivers an uneven production. Rooted in Grimsby for the first part, it abruptly switches to South Africa for convoluted plot reasons, which may get Baron Cohen out of a comic cul de sac but does nothing for the patchy narrative or the colourful characters he’s now left behind - Rebel Wilson, in particular, is missed. Still, when there’s this many pubic hair, testicle and sperm jokes to shoehorn into 82 minutes, why bother with the finer points - although Nobby using a loofah to clean his scrotum has to be a new low. Baron Cohen certainly knows how to assault an audience; this time around he goes below the belt for his laughs.