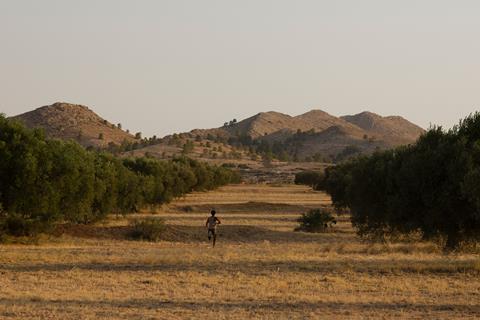 It has been a full decade since the Arab Spring protests changed the course of history in much of North Africa and the Middle East. But for people like twenty-something Ali (Adam Bessa, who is excellent), an itinerant petrol seller on the streets of Sidi Bouzid in Tunisia, the revolution passed him by. His opportunities are non-existent, his attempts to make a better life thwarted at each turn. In his shoes, many young men try their luck abroad. Ali, too, had hoped to take his chances in Europe before the death of his father left him responsible for his two younger sisters and the sizable debt his dad left behind. Ali’s anger and frustration is the engine which gives this heartfelt drama its energy; Bessa’s terrific performance, a thunderous scowl masking his rising anguish, is a considerable asset.

The first fiction feature from British-Egyptian-American writer/director Lotfy Nathan, Harka won the work in progress prize at the 2021 Red Sea Film Festival and has already sold to France (Dulac Distribution). It follows Nathan’s acclaimed 2013 documentary, 12 O’Clock Boys, which screened in multiple festivals and earned him the HBO Emerging Artist Award. Loosely inspired by the story of Tunisian street hawker Mohamed Bouazizi, whose self-immolation sparked the wave of protests that coalesced into the Arab Spring, the film is forthright in its condemnation of government corruption and society’s indifference, and unflinching when it comes to depicting the consequences of rock bottom desperation. It should prove to be a talking point addition to further festival programs, particularly in human rights-themed events, and could find a home with arthouse distributors or curated screening platforms.

The title, Harka, has two meanings, both pertinent to the plight in which Ali finds himself. One meaning is “to burn”. The other is a colloquialism for migrating illegally across the Mediterranean by boat. It’s a choice of title which speaks ominously of the future for Ali – it is fair to say that there are no shortage of clues in the film which foreshadow his fate. Perpetually smeared in oil and grease from his job illegally selling gas to passing motorists from a jerry can, it is almost as though Ali has given up trying to wash the low status from his appearance. Certainly, the people he encounters – the powerful, the successful – make no secret of their superiority, if they acknowledge him at all.

The sense of place and plight is vividly brought to life, but the storytelling itself lacks subtlety. A score which can be a little too on the nose at times gives a brooding rumble to Ali’s rage at the injustice which sees the bank foreclosing on the family home, and Ali and his sisters facing homelessness. The younger of the two girls, Alyssa (Salima Maatoug), represents the hope that has been crushed from the life of her older brother. She gets her own delicate musical motif on the score, and it is her brief but poetic voice over which sketches Ali as a man rather than just a struggle: “He felt like a ghost sometimes. People looked through him.” This theme – the invisibility of victimhood, the temptation to look away rather than to confront real need – gathers momentum as the story unfolds, and Ali is forced further onto the wrong side of the law. And it is central to a powerful and genuinely disturbing final scene.