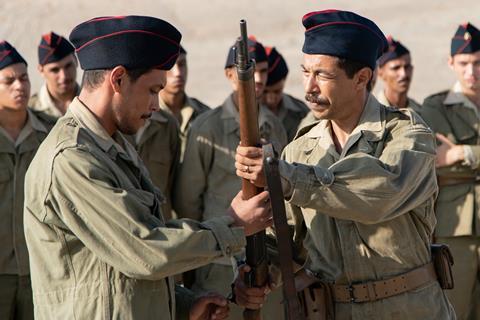 Philippe Faucon’s Harkis offers a cinematic history lesson, but in the best possible way. This non-judgmental portrayal of a group of people who, for various reasons, find themselves on the wrong side of history – and abandoned there – gives a clear, sober account of the travails and contradictions experienced by Algerians who served in the French colonial army while their nation was struggling for independence. The latest Maghrebin-themed film by the Moroccan-born French director – following La Trahison, Fatima and 2018’s Amin – Harkis is a narratively and artistically pared-down war story which adroitly frames its characters so that they register both as individuals and as representative figures in a complex historical situation. It will appeal to outlets attuned to intelligent political film-making with a rigorous auteur touch.

While individuals and their motives stand out vividly amid the action, this is very much an ensemble piece

The ’harkis’, an opening caption explains, were Algerians serving in the French army as members of units called ’harkas’, from the Arab word meaning ‘movement’. Faucon’s story follows a number of harkis, largely shown as signing up – like family man Salah (Mohamed Mouffok) - because they and their families are in dire financial straits, with army wages their only solution. They are also fed a consistent line from the French army about how De Gaulle’s government will protect the nation from the fellagha, a pejorative term applied to fighters for the Algerian independence front, the FLN, whom the French depict as terrorists.

By contrast another man, Krimou, is a FLN fighter who has cracked under French torture – in an unsparingly brutal scene nevertheless handled with very effective restraint – and who has become as dedicated to his duties as a harki as he was to the liberation cause. This is one of the many paradoxes the film pinpoints in its depiction of those persuaded, forced or tricked into fighting against their own people – and, the film suggests, used as cannon fodder rather than endanger French troops.

Meanwhile, in a role subtly transcending the cut-out figure of the ‘good Frenchman’, the harka’s commander Lieutenant Pascal (Théo Cholbi) carries out his superiors’ orders, but stands up for his men particularly when liberation is announced. At this point, the harkis are left in a sticky predicament: either remain in the army and be repatriated to France, or stay at home and face reprisals from those who regard them as national traitors. Indeed, as the narrative shows, France made repatriation more difficult than promised, and – per closing captions – between 35 and 80 thousand harkis (accounts differ) were killed after liberation as a result of their involvement in the French army.

The film begins with the image of a man finding his son’s severed head in a basket, and the dead man’s brother signing up as a harki in his place. Even among the harkis, one scene shows, there is mistrust at those seen as selling out for French pay. And the mounting contradictions of the recruits’ position become evidently clear not only in Krimou’s progress but in the ease with which a group of harkis pass themselves off as FLN men in order to track down an enemy commander.

Harkis is concisely harsh in its telegraphic depiction of violence, and it is made clear in the dialogue that brutalities were practised on both sides of the struggle. But what emerges foremost is the callousness of the French government, which constantly reassures the Algerians that they will be looked after – only for the recruits and their families to be left high and dry when independence comes. Indeed, as the end of the war approaches, the harkis are refused the full facts of the changing situation, one sequence showing this particular harka shunted off to a remote area to keep them in the dark about the possibility of the war ending.

Spanning the years from 1959 to 1962, the narrative gives a strong sense of successive political moments, with individual sequences – captions intermittently marking dates – showing the harkis on various missions. While individuals and their motives stand out vividly amid the action, this is very much an ensemble piece, showing this harka as a representative group of manipulated pawns – although the final shot shows that one character at least has succeeded in breaking the chains of false consciousness.