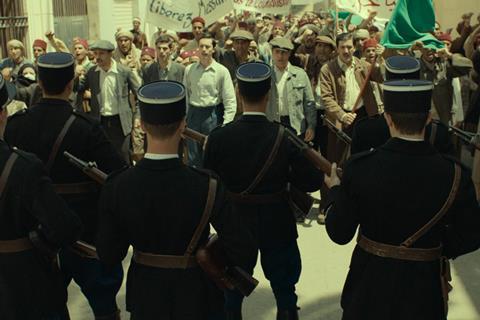 Algeria’s long struggle for independence has inspired a vast body of cinema stretching from Gillo Pontecorvo’s seminal The Battle Of Algiers to Mohammed Lakhdar-Hamina’s Chronicle Of The Years Of Fire and the Oscar-nominated films of Rachid Bouchareb (Days Of Glory, Outside The Law). Djaffar Gacem’s debut feature initially opts for a melodramatic approach to real events, but the darker second half more effectively conveys the extent of colonialist atrocities that fuelled the hunger for self-determination. Unsubtle at times, Heliopolis should still engage and outrage international audiences, and its selection as Algeria’s Oscar contender will enhance its prospects.

Heliopolis is set in the Guelma region of Algeria and begins in 1945 as the war in Europe ends. It then rewinds to five years earlier when high school graduate Mahfoud (Mehdi Ramdani) returns home. His father Mokdad Zenati (Aziz Boukerouni) runs an estate and is a respected figure among both the indigenous Muslim population and the French authorities. It is a time when the locals are “expected to know their place,” and Gacem depicts a culture of privileged foreign settlers and a compliant underclass. There is almost a feel of Downton Abbey or a similar Sunday night serial in this world of days at the races, drinks at the club and illicit romance between the classes. Mokdad’s daughter Nedjma (Souhila Mallem) and her fondness for stable worker Bachir (Mourad Oudjit) is one of the secondary plot elements that feels underdeveloped.

Cinematographer Ugo Lopinto offers a vision of Algeria that is bathed in bright sunshine and filled with beautiful landscapes. Golden wheat fields sway in the breeze whilst trains chug across the horizon and elements of the past survive in horse-drawn carts. It looks too clean and pristine to be true, and perhaps that is the point. Beneath the shiny surface of this colonialist paradise is a sense of discontent and injustice waiting to boil over.

The first hour of the film is spent establishing this world, the connections between the people who inhabit it, and the various tensions between classes, between generations and between those who favour assimilation over those who desire change. Boukerouni impresses with the dignity and anguish he invests in Mokdad, a man who believes in mutual respect, keeping the peace and having faith that one day equality will be achieved. Mahfoud grows more politicised as his eyes are opened to what is happening all around him. He joins avuncular shop owner Sadek (Fodil Assoul) and others as they start to mobilise and devise a manifesto for independence.

Heliopolis unfolds during World War Two, from the French surrender to the Nazis through the Vichy regime to the liberation by the Allies. French pride is battered and then patriotism is resurgent, making the need to remain in control of Algeria all the more essential to their sense of self-worth. That patriotism only aggravates an indigenous population expected to serve their “country” and relish France’s victories. Heliopolis has some characters representing decent, good-hearted French residents, but most are depicted as embodiments of black-hearted villainy, especially merciless sub-prefect Achiary (Vincent de Bouard) and vengeful, trigger-happy farmer Gervais (Alexis Rangheard).

Gacem’s almost soap-opera focus on individuals and personal relationships pays off in the second half. We have an emotional investment in the fate that befalls the characters as the movement for self-rule is brutally quashed by the French. The catalogue of humiliations, beatings, implacable hostility and executions brings home the full horror of colonialist rule.

Closing titles inform us that 45,000 Algerians lost their lives in massacres at Guelma, Setif and Kherrata. Gacem dedicates his film to the fallen and what became a major turning point in the hard road to independence.

Production company: Algerian Centre For The Development Of Cinema