‘How To Be A Good Wife’: Review 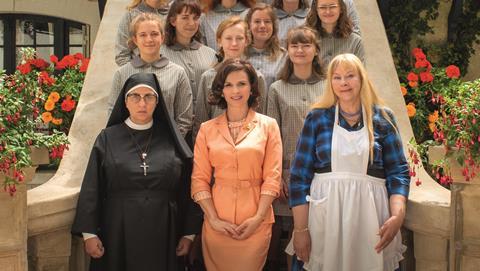 Women’s Liberation and the sexual revolution come to ultra-conservative 60s France – heralded by larky winks and nudges – in How To Be A Good Wife, a breezy, well-intentioned but ultimately laborious comic vehicle for Juliette Binoche. The film is a departure for writer-director Martin Provost, best known for such serious-minded female portraits as 2008’s César-garlanded artist biopic Séraphine and 2013’s sombre Violette, about novelist Violette Leduc. By contrast, this is an ensemble piece that surrounds Binoche with top-notch comic talent, and that has its heart and mind in the right place when it comes to the 1960s archeology of patriarchy, French-style. But tonal unevenness – awkwardly balancing goofy farce, heavy-handed social satire, and earnest emotional directness – makes for a flimsy misfire. Binoche and a prestige cast should make for a domestic crowd-pleaser on its release in March, but it’s unlikely to make serious waves abroad.

The film begins in 1967 in Alsace in Eastern France, at the school for good housekeeping run by Paulette van der Beck (Binoche) and husband Robert (François Berléand), an ineffectual lecher and tippler. Paulette is the poised figurehead of an archaic establishment which drums the lore of traditional wifedom into its teenage girl pupils; working alongside her are Robert’s gauche sister Gilberte (Provost regular Yolande Moreau, decked out in improbable blonde tresses) and authoritarian nun Sister Marie-Thérèse (Noémie Lvovsky).

Although the failing school is down to a handful of new students – with some indomitably resistant to its discipline – Paulette soldiers on unflappably, until fate takes a hand, in the form of Gilberte’s rabbit stew. Facing an uncertain future, Paulette consults banker André (affably rakish Edouard Baer), who happens to be her impassioned admirer from way back. His attentions help shake her out of her repressed mindset – helped along by radio reports of unrest in the capital, as the events of May 1968 loom ever closer.

Much of the humour centres on Binoche’s briskly self-mocking performance as a squeaky-clean domestic goddess of the De Gaulle era – but while she’s generally good at the crisp, coy perkiness, she can be that bit too manic at times. As the amusingly innuendo-prone Gilberte, Yolande Moreau similarly overdoes the kookiness, although since this popular comic actress is a law unto herself, that’s not such a problem. By contrast, a sharp-edged Lvovsky has the comic tone just right – while the school’s Class of 67 is personably headed by up-and-comer Marie Zabukovic, channeling the look and self-possession of mid-60s Bardot.

The film’s appeal leans heavily on mise en scène: meticulous period production design by Thierry François, emphasising oppressive, wood-heavy Alsace interiors, plus Madeline Fontaine’s elegant, eloquent costumes. This is just as well, however, since Provost is neither a natural comic director, nor sure-handed at controlling tone – as in a tryst scene between Paulette and André, where allusions to the grim legacy of World War Two feel seriously misplaced.

The film’s big payoff, but also its clunkiest false step, comes when – quite out of the blue – Binoche leads the assembled female company in a song-and-dance rewrite of the school’s founding principles in accordance with the new tenets of female emancipation. Feeling like a mannered , jazzy pastiche of the consciousness-raising folk numbers in Agnès Varda’s 1977 feminist epic One Sings, The Other Doesn’t, it makes for a razzle-dazzle patriarchy-baiting flourish, but it seems to have waltzed in from another film entirely.