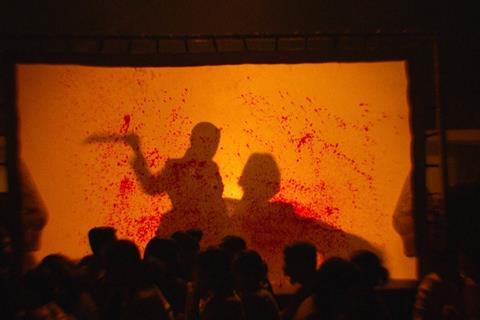 A terrible curse has blighted the lives of the inhabitants of Maya’s (Tara Basro) home village. But the real threat lies in the hearts (and the enormous knives) of the villagers themselves, as she discovers when she returns to her ancestral home for the first time in 20 years to learn the truth about her birthright. A heady combination of the supernatural, backwoods bloodlust and a malevolent crone makes for an entertaining, pulpy horror, but the film focuses more on incorporating Indonesian cultural elements – Javanese shadow puppetry wayang kulit (which literally and ominously translates as ‘skin puppet’) features heavily – rather than delivering neatly packaged scares.

The blood-letting and gore is handled with exuberant gusto

The latest film from prolific Indonesian genre specialist Joko Anwar, Impetigore has already been a commercial success domestically, partly at least because it comes on the wake of Anwar’s box office-topping Satan’s Slaves (2017), the highest-grossing horror of all time in Indonesia. Genre programmers will take notice, but it is possible that the cultural specificity which should make Impetigore an item of interest in midnight slots at film festivals (it shows in Sundance as well as Rotterdam) might limit the film’s potential to connect with mainstream horror audiences outside of Asia.

Maya’s daily routine as a toll booth operator on the outskirts of Jakarta is interrupted one day when a dishevelled man wielding a machete attempts to kill her. Claiming to be from the village she left as a child, he pleads “We just don’t want what your family left behind, please take it away!”. Research into the early life that her guardian shrouded in mystery reveals a photograph of the young Maya with her parents, standing next to an imposing house. With her savings depleted by a failed business, Maya decides to investigate whether her family home might be an inheritance which could solve her financial problems. She travels with her best friend Dini (Marissa Anita), taking a five hour regional bus which, as one of the other passengers tells her unprompted, is full of spirits which don’t know where to go.

Using the cover story that they are university students researching Javanese shadow puppetry, Maya and Dini seek an audience with the village elder Ki Saptadi (Ario Bayu). Instead, they encounter his mother, who snarls a warning that her son will not be available to meet them until the following day. With nowhere else to stay, the girls bunk in the abandoned shell of Maya’s family home.

An overly spooky score, which sounds like a choir made up of moaning unquiet souls and banshees, is never far from the action, lending an ominous shivery portent indiscriminately throughout the film. Likewise the colour palette, an unrelenting wash of blood-stained reds and sulphurous yellows, which offers little tonal respite.

Anwar creates an atmosphere which is thick with menace and cobwebs, but the pacing of the picture and its reliance on lengthy chunks of exposition means that it doesn’t deliver much in the way of suspense. However, the blood-letting and gore is handled with exuberant gusto – a useful attribute in a film in which characters cut their own throats and those of other people with messy regularity.