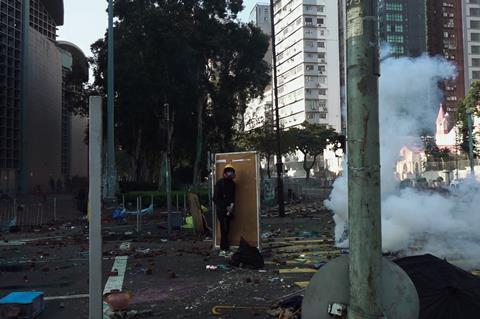 ‘Inside The Red Brick Wall’

Setting a new standard for immediacy and intensity in current affairs reportage, Inside the Red Brick Wall is a vividly powerful account of the November 2019 siege of Hong Kong’s Polytechnic University during the protests against Hong Kong’s Extradition Bill. Made by a collective known as ‘HK Documentary Filmmakers’ – for safety reasons, they choose to remain anonymous, while faces of participants are digitally blurred – the feature covers events at Poly U from the inside, with the filmmakers exposing themselves to considerable risk as part of the protest action. The film is competing in IDFA, which is also showing the group’s equally vital 47-minute Taking Back the Legislature, about an earlier episode in the protests. Singly or together, these films will be widely seen, and mark an important development in the history of political documentary in the digital era.

Radically different from any news footage that we normally see: it’s rare to see such events covered from the inside at such sustained length

The title – shown only some 24 minutes in – presumably refers both to the red brick walls of Hong Kong’s Polytechnic University campus, and to the red bricks laid down by protesters before the siege as makeshift roadblocks. The film begins with a black and white prelude, showing an early stage of the protest in early November, the so-called ‘Operation Dawn’, before we see protesters blocking the Cross-Harbour Tunnel and roads near the university. By November 17, protesters, carrying their famous signature umbrellas, face police attacks from water cannon, rubber bullets and tear gas. Once the protesters establish Poly U as their base, they come under siege and soon face the choice of staying in place, with supplies diminishing, or leaving the premises and being arrested and facing unknown consequences. The siege, in fact, lasted 13 days, with a total of 1,377 people arrested, 318 over them under 18.

The filmmakers, always at the heart of the action, capture both the turmoil of the police-protester face-offs and the tense moments within the campus walls, as demonstrators debate tactics. Several attempts are made to leave the site – at one point, several people successfully abseil out – but the protesters know what awaits them if they leave and are caught. Several sequences show brutal police treatment not only of demonstrators but also medical staff and press. A tense moment towards the end erupts when a delegation of secondary school principals enter the campus to help remove younger students, and are met with mistrust as desperation, anger and confusion mount.

Several factors mark these events as being very much of this historical moment. One is the way that music is used as a weapon by both sides – the protestors blasting out anti-police rap number ‘Fuck the Popo’, while the police, showing a distinct ironic streak, attempt to demoralise the opposition by playing pop songs with titles like ‘Surrounded’ and ‘Ambush From Ten Sides’. What’s evident too is how much this is a protest of the digital age: not only do Facebook and other social media platforms play a huge part in protesters’ communication with the outside world, but we also see participants watching coverage of their own action on huge VDU screens or iPhones, all showing multiple TV channels. This chimes with the film’s extraordinary sense of simultaneous action, with multiple camera operators – although we don’t know how many - capturing events from every conceivable angle.

What’s remarkable too is how coherent the film is: despite the chaos both inside and outside the Poly U site, the filmmakers have achieved a remarkable feat of collating the events into a readable shape, signposted by occasional captions. The general tenor is frenzied – there’s barely a moment of calm, although there are many of weary desperation - but there are some telling oases of quiet, and single resonant images. Among them, a single abandoned sneaker lying among debris, an exhausted woman leaning her face against a wall, and a sheet of metallic paper flying around after the siege (some very spare use of ambient music leavens the tension at the end).

Perhaps the closest comparison in modern documentary is Maidan, Sergei Loznitsa’s film about the 2013-14 Kiev protests. But while that film took a somewhat detached, highly crafted approach, Inside the Red Brick Wall – as well as Taking Back the Legislature, which covers the June 2019 occupation of Hong Kong’s Legislative Council (LegCo) building – is very much an insider account, evoking the experience of those taking direct action. The films are radically different from any news footage that we normally see: it’s rare to see such events covered from the inside at such sustained length, and with such a clear sense of personal investment and risk from the film-makers. The HK collective’s works are a remarkable feat, and rarely less than galvanising to watch.