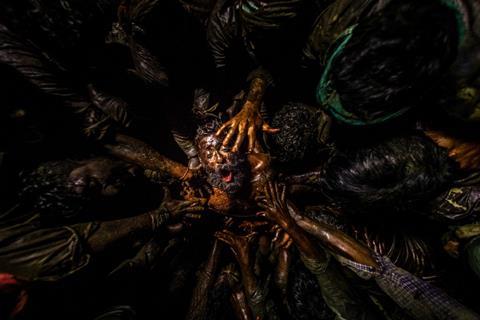 An escaped buffalo rampages through a south Indian village in this brawling allegorical action picture. The beast destroys flagpoles and upturns food carts; it tramples a cardamom plantation and, directly or indirectly, causes numerous injuries and at least one death. But with a somewhat overstated ending, director Lijo Jose Pellissery leaves us in no doubt whatsoever that the most dangerous animal of all is the human male.

Kerala-born Pellissery has achieved previous success in Malayalam language cinema, notably with Ee.Ma.Yau, which won him prizes at the Kerala State Film Awards and the International Film Festival Of India. His latest, which is based on a short story by S. Hareesh, is a cacophonous ruckus of a movie which, while perhaps lacking in nuance, is never less than thunderously entertaining. It screens in Busan following its premiere in Toronto; further festival slots seem likely. While there is a question mark over the appetite in overseas arthouse audiences for Malayalam language action films about a buffalo gone berserk, the picture shares a relentless gung ho energy (if not the technical polish) with martial arts pictures like The Raid.

Some of the most formally interesting filmmaking comes at the very start of Jallikattu (the title refers to a traditional bull running spectacle in India). Choppy editing to a rhythmic thud which could be a ticking clock but is more likely the hack of a machete introduces us to life in a village which seems to be powered by a combination of domestic violence and liquor. At times almost an abstract collage of image and sound, the film’s opening both sets the scene and ramps up the energy to a level which rarely flags.

Sound works overtime to cover for budgetary restrictions – the actual buffalo escape plays out on a black screen, with just the shouts of the butcher and his hapless lackey to tell us what has happened. The chaos as the animal charges through the heart of the community is conveyed by machine gun bursts of score, disorientating flashes of fire and more black screen. The aftermath, a burning haystack, sets the village on high alert.

And it’s not just the beast that is unleashed. The escape seems to give licence to a kind of ecstatic frenzy of aggression among the men. Folk from neighbouring villages join the hunt, which turns into a riotous carnival of bloodlust and boozing. Local hero Kuttachan (Sabumon Abdusamad), recently released from prison after stealing sandalwood from a church, is summoned back to town, to the fury of his sworn enemy Antony (Antony Varghese). A face off between the two rivals seem inevitable. There is more than one out of control beef in this movie.

Jallikattu won’t be for everyone. The humour, relying on crude caricatures and hypocrisy, is fairly culturally specific. And all the incessant shouting is rather wearisome, although presumably that’s the point. The simmering of macho aggression has boiled over and is roaring out its impotence at eardrum shredding decibels. A penultimate climactic scene, a Hieronymous Bosch meets Suddenly Last Summer fury of bloodlust, is, however, genuinely remarkable.