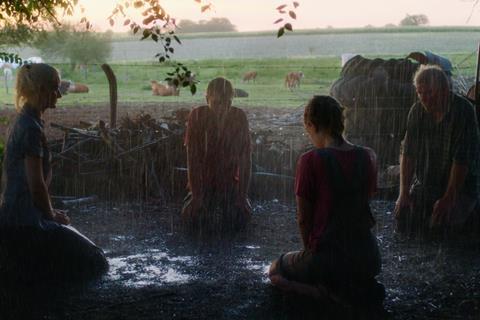 The hopes, dreams and fears of an insecure young farm worker in rural Argentina come literally to life in Maximiliano Schonfeld’s Jesus Lopez, which opened the Horizontes Latinos section at San Sebastian. Through its first half a well observed and downbeat exploration of a village community’s reaction to tragedy, the film then daringly become something quite different, mixing up the real and the fantastic more effectively than Schonfeld managed in 2017’s Black Frost, albeit on a smaller canvas. It’s a twist that gives this warm-hearted, and thought-provoking film an edge that could take it onto the festival circuit beyond its natural home, the Latin American film circuit.

The opening scene shows Jesus (Lucas Schell) riding his motor bike through the night before hitting a car; the death will hang heavy over the local community, and particularly over his younger cousin Abel (Joaquin Spahn). Abel is a gentle-spirited lad with an appealingly hangdog air who’s happy to spend his evenings watching slasher movies with his pregnant sister: marked by tragedy, Abel carries facial scars that will only be explained later. Abel has long admired the long-haired, hippie-ish and much cooler Jesus, adored by the community for his accomplishments as a racing driver, who seems to come from a different world and in fact looks pretty similar to his 2000-year-old namesake.

After Jesus’s parents invite him to stay, it becomes clear that Abel has effectively been adopted by them: he plunges into Jesus’ old life and befriends Jesus’ girlfriend (Sofia Palomino). When Jesus’s father El Cacho (Alfredo Zenobi) suggests that Abel take Jesus’ place in his last dirt track race of the season and starts training him, it’s as though Abel is being totally supplanted by his older cousin.

During one scene, Abel rolls under a car and emerges on the other side as — you’ve guessed it — Jesus, complete with beard and flowing locks. The transformation is apparently invisible to everyone except the audience and perhaps to Abel himself, and it’s testament to Schonfeld’s skill that the sequence not only comes off without a single audience snigger, but is also quite moving. It’s a potent, religious-mystical idea thrown into the middle of a small-town movie — that the memories and love of a community can bring of its members back for one last shot at glory. Abel/Jesus and their gang set about finding the driver of the car that killed him.

As Abel memorably points out, in a go-nowhere town like this one, “cows are just cows”; but that’s just not enough. You need dreams: you need cars, which free you, but which are also death machines. Jesus Lopez therefore plays like a thousand movies and Springsteen songs about teens seeking to escape the sticks for a more heroic life, with the difference that Abel is quite literally transformed into his hero and is thus able escape from what awkward teens are really seeking to run from — themselves. (If their T-shirts are to be believed, the youth of this particular Argentinian farming community are all metalheads.) It’s a risky gambit dramatically, but the audience is happy to ride along.

The restless camerawork of Federico Lastra and the sometimes ironically cheesy music of the fabulously named Jackson Souvenirs are key to creating the dreamy atmosphere in which these events  play out, against a countryside background of dappled fields and golden sunsets. The blend of reality and fantasy that many associate with Latin American cinema has in fact been missing from the often-gritty work of its recent younger film makers. But although Schonfeld is rightly careful not to take his story into the realms of the facile or the incredible, there’s the feeling that the script doesn’t fully explore the rich ambiguities of the situation it’s been so careful to set up, with the final twenty minutes unspooling too hastily.