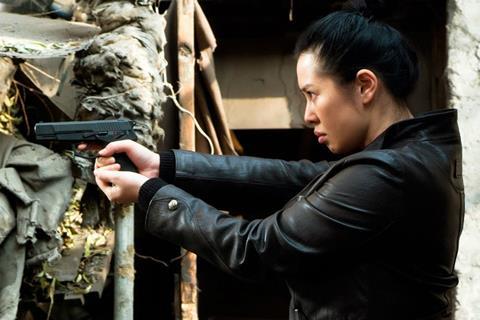 Taking a micro-level approach to China’s widely publicised crackdown on drug dealers, Justice in Northwest is a tepid police drama which squanders the potentially atmospheric milieu of one of the nation’s less affluent cities on a mundane tribute to its hard working law enforcers. Aiming to give the proceedings some gravitas, writer-director Huang Huang enlists the reliable services of Yu Nan and Simon Yam, yet the film is assembled in such a slipshod manner that their combined efforts are unable to overcome its shortcomings.

To hold things together, Huang leans heavily on Yu and Lam’s performances

Although China’s cinemagoers are generally happy to see justice get served providing it is done with a certain brio, this procedural lacks the excitement necessary to make any box office impact. Internationally, Yam’s cachet in genre fare thanks to his roles in classic Hong Kong crime films by Ringo Lam, Johnnie To, and John Woo could be parlayed into streaming sales. He’s such a prolific performer, though, that niche distributors and fans of Asian thrillers would be best advised to wait for his next appearance.

Set in Baiyin, a prefecture-level city in Gansu province, the film starts with a chance encounter between Gao Qiao (Yu) and small restaurant owner Lu Hong (Yam) when they rush to assist an injured driver following a traffic accident. Afterwards, Lu Hong invites Gao Xiao back to his establishment to clean up, and serves her a complimentary dish of his delicious porridge. Both are melancholic souls, and a friendship blossoms.

Lu Hong is, however, haunted by a dark past. Once a university chemistry professor, he is now affiliated with a ruthless narcotics network headed by Lao Jiang (Jack Kao) having taught them how to cook methamphetamine. When he learns that Gao is a police officer, pangs of conflict permeate his usually easy going demeanor. Meanwhile, Gao Xiao is determined to apprehend Lao, as his silent assassin (Samuel Pang) has fatally knifed one of her undercover colleague’s during a botched bust.

Loosely based on a true story, this was reportedly a troubled production with filming commencing back in 2015 but temporarily shutting down as a result of financing problems. And, despite utilising the city’s streets, eateries, public baths and dusty roadsides to convey the sense of a place where traditional values are being undermined by nefarious enterprises, the resulting film looks desperately stitched together by editor Li Jun. Scenes often transition awkwardly with distracting fadeouts, and the sporadic action sequences lack any sense of urgency. An early set piece in which a surveillance operation turns into a foot chase is marred by poor cross cutting, while the subsequent drug factory raid is over in a flash.

Indeed, the only tension here comes from Huang seemingly being torn between making a terse thriller and an affectionate provincial portrait with an emphasis on local cuisine. Frequent shots of stone pots bubbling away in Lu’s kitchen allude to his underworld identity but also to the healing power of good, simple food. Aside from the conflicted Lu Hong, the moral fiber of the characters is signified by the quality of what they eat. Police officers get abundant canteen food, prisoners are served decent meals as part of their social rehabilitation and the assassin is reduced to slurping sodium-heavy instant noodles. It’s a nice motif, but one that is tonally out of sync with the film’s grittier aspects.

To hold things together, Huang leans heavily on Yu and Lam’s performances. Returning to lead status following her thankless role in the Wolf Warrior series, Yu plays her dedicated officer with a quiet weariness — although she could just be yearning for better material. Allocated a wider range of emotions, Yam invests his low-key criminal with some depth and etches out an effective redemption arc.