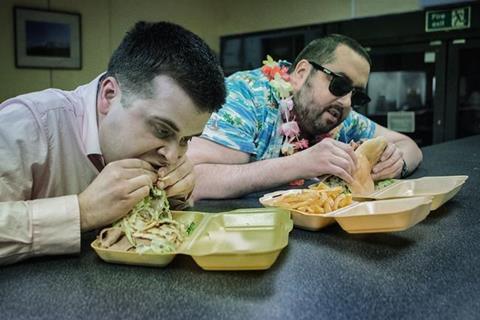 Commercialised cannibalism has a respectable track record in melodrama, horror and satire – all the way back to Sweeney Todd and Swift’s ‘Modest Proposal’ to a range of cult films like Eating Raoul, Motel Hell and Fried Green Tomatoes at the Whistle Stop Café.  Writer-director Dan Pringle riffs on almost all of these – with a soupcon of Roger Corman’s A Bucket of Blood and a dash of the TV series Dexter – and takes a surprising turn from gross-out horror into serious indictment of binge-drinking, immigrant-hating Britain with a complex, uncomfortably credible protagonist.

There’s a rich seam of black humour in punishment meted out to loathsome stag/hen night customers, but the film is surprisingly serious.

An unnamed seaside town (played by Bournemouth) has become a late-night hell-on-earth thanks to overspill of drunken partiers onto the streets.  Pringle punctuates the film with CCTV-style montages of relentless, unlovely booze-fuelled bad behaviour (including some documentary footage).  Late in the day, Big Brother-winning club owner Jason Brown (Scot Williams), the low-rent supervillain who enables the chaos, needles psycho-vigilante Salah (Ziad Abaza) by saying his kind (he means immigrants) don’t know how to have fun and hate and envy the British for their ability to enjoy themselves.  It’s a chilling moment because in this endless party no one (except Brown) has anything remotely like a good time.

‘Of course have a drink … but don’t be an arsehole,’ warns the copper on the case, only to be ignored by everyone.

Student Salah comes home because his ailing father Zaki (Nayef Rashed) can’t handle running his kebab shop.  Zaki dreams of opening a restaurant in a property which Brown buys and turns into a nightclub called Slush.  Zaki is knocked over by random drunks and dies – and Salah stubbornly keeps the shop open, despite debts which mean no meat delivery.  When yet another drunk customer is aggressive after closing time, Salah shoves the man’s head in the fryer – and has the bright idea of using his body to restock the kebab pole, serving him up as lamb to a pair of obnoxious chancers.

Salah struggles with his conscience and disgust, but – like Sondheim’s Sweeney Todd – comes to see the logic and justice of recycling corpses as fast food.  Also, his customers love the ‘lamb’.  The parade of blind drunk, appalling people continues and Salah gives up his studies to devote himself to murder and facilitating cannibalism.

Six years pass and Salah’s stripped-down life becomes complicated.  He meets a possible soulmate in budget hotel manager Sarah (Kristin Atherton), acquires ambiguous apprentice-disciple Malik (Reece Noi) and gets into a strange, conversational relationship with Steve (Darren Morfitt), a prospective victim chained to a freezer in the cellar.  He also targets Brown, working to bring down his nemesis – adding a plot-spine to an episodic film.

There’s a rich seam of black humour in punishment meted out to loathsome stag/hen night customers, but the film is surprisingly serious.  Salah grows more sensitive rather than desensitised as his campaign of murder fails to change the world.  Pringle takes a risk in switching from gross-outs to conversation in the third act, but finds sympathy even for the sweary, aggressive Steve – though the man’s complaints about his harsh childhood (missing half a football match because of his unreliable Dad) are contrasted with Salah’s memories of hiding in acave from a repressive regime’s gas attacks.

The climax is intricate and full of multiple ironies – and makes a wounded man in a duck costume staggering through the streets a tragic spectacle.  With strong work from a good cast (Abaza in particular), this joins a small group of British horror films rooted in observation and anger (Eden Lake, The Riot Club, Tony).