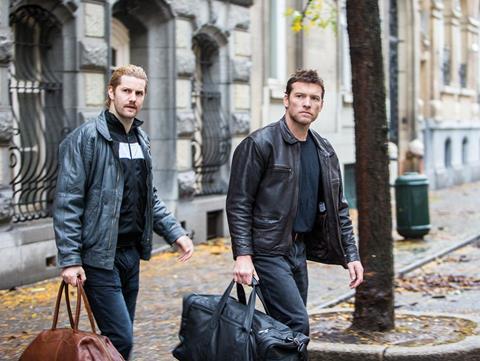 An oddly half-hearted, somewhat beige re-telling of an event which took place in the Netherlands in 1983, when the richest man in the country was kidnapped and held for ransom for 21 days, Kidnapping Freddy Heineken is notable only for an appearance by Sir Anthony Hopkins as the titular brewer-turned-prisoner.

Inevitably, the kidnappers begin to squabble and bicker; Heineken isn’t the only one being tortured here.

Released on April 3 on VOD and in a smattering of theatrical sites, Kidnapping Freddy Heineken boasts – on paper – an interesting support cast of Australian actors including Sam Worthington and Ryan Kwanten alongside Jim Sturgess (oddly blonde), all playing Dutch lowlifes and small-time hoods. It’s directed by Sweden’s Daniel Alfredson (brother of Thomas), who made the last two episodes of The Girl With The Dragon Tattoo TV series, and it was shot in Amsterdam, Antwerp and, indeed, Louisiana.

Despite its seeming attractions, though, Kidnapping Freddy Heineken turns out to be a strangely lacklustre, unconvincing attempt to tell the story of the Heineken kidnapping, which set a record for Holland’s largest-ever ransom payout, 35 million guilder (Euros 15m), but lacks any impact as related here. As this is an international production, with an English-speaking cast, it’s unlikely to make too much of a dent in Holland, either.

In much the same way as the Great Train robbers or the Brinks Mat thieves, the five members of Alfred Heineken Jnr’s kidnap gang became well known in their country’s media and crime journalist Peter R. De Vries wrote a book about the affair, on which this film is based.

Freddy Heineken presents the gang as childhood friends who are looking for a bank loan to fund their construction business and go straight. Turned down, of course - on the basis of their haircuts and odd, faux Dutch accents alone they look like a bad bet - they resort to planning an audacious kidnapping of brewing chief Alfred Heineken, something which took two years to plan in real life and was so meticulous and all-consuming it involved raiding banks to fund it.

Initial sequences shot on the Amsterdam canals hold out the promise of a Heat-style kidnap by this gang of mask-wearing bandits, but these fade in the light of predictable characters and plotting. The gang of five childhood friends is presented as being hopelessly amateurish, going to far as to leave the ransom note in the photocopy machine. There’s a tough guy, a sensitive soul, one with a pregnant girlfriend (Jemima West), etc. Inevitably, they start to squabble and bicker; Heineken isn’t the only one being tortured here.

The hope is that Anthony Hopkins, when he eventually appears, can pull the film into some sort of life but he has, memorably, delivered better performances from a cell, and his dialogue is strangely inane. Much like the film’s Moroder-ish techno beat, it all wears thin, long before the post-kidnap years are detailed and we learn of the individual kidnappers’ fates.