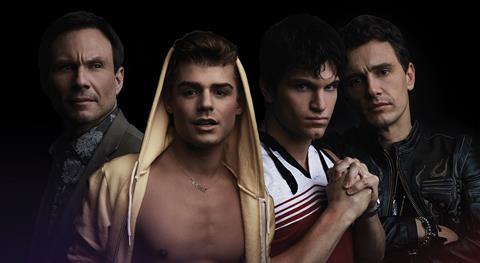 Kelly deftly accords the milieu a normalizing jauntiness through Tim Kvasnosky’s effervescent electronic score and hilariously banal small talk about clothes and food; a mainstream sheen that counters the visual seediness of such Silicone Valley biopics as Rated X (2000) and Wonderland (2003); and the casting of four erstwhile Young Hollywood stars. Standouts as introverted and extroverted gay “daddy” figures respectively, Christian Slater and James Franco – the latter a producer of the project and a driving force behind it – are gamely joined by Alicia Silverstone and Molly Ringwald. Each actress plays a naïve woman blindsided by the realization that she has a close relative working in porn.

Kelly rapidly intercuts between Sean and Stephen’s fraught collaboration and the relatively harmonious one of Viper Boyz producer Joe (Franco), who is a lapsed Christian, and his co-producer, star, and boyfriend Harlow (Allen), who supplements their income as an escort. Their movies involve much sweaty coupling and sneering, boasting, and porn-speak. The lines between acting and being have blurred for Harlow who, emotionally damaged and dependent on Joe’s love, is dangerously unstable.

Part of the fun is anticipating when the parallel stories will converge. The impetus is Sean demanding from Stephen a raise from $1,500 to $10,000 per movie and then being made to clean the toilets. This prompts his cataclysmic revelation that he was underage when Stephen first filmed him – a thorny issue the movie ends up evading.

The tongue-in-cheek sex scenes – bleary digital movie clips recall the good old days of VHS – are tame in comparison with those in Alain Guiraudie’s Stranger by the Lake, for example. In this day and age, there’s nothing in King Cobra to incense tolerant adult audiences. Filmed from the perpetrator’s perspective, the grisly murder is upsetting, however, given that the victim has been portrayed sympathetically. Kelly doesn’t exonerate the killer but directs his anger toward a family member whom, it’s disclosed, had raped him as a child. Though it mostly palliates its seriousness with humour, King Cobra alights on abuse, supposedly a shaping experience in many porn actors’ lives, as it works toward Sean’s liberation.