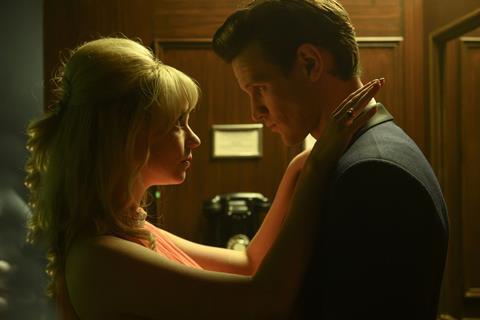 The history of a city – the good times and the bad – seeps into the very fabric of its architecture like a stain, explains one character in Edgar Wright’s riotously entertaining thriller. Past events leave a kind of sense memory which can be picked up, years later, by those sufficiently attuned. One person who has the dubious gift which allows her to catch these tenuous strands between the present and the past is Ellie (Thomasin Harcourt Mckenzie), an aspiring fashion designer from rural Cornwall. When she realises that her Fitzrovia bedsit allows her to connect with events which unfolded in mid 60s Soho, she’s initially thrilled. But then things take a darker turn – London is a bad place, after all – and the peppy 60s Carnaby Street aesthetic takes on a wigged out giallo flavour. It’s a blast. Last Night In Soho is the kind of good time which isn’t over until someone’s either crying or bleeding. And oh, how we’ve all missed those nights!

The history of a city, certainly a city like London, is also present elsewhere – in the culture it spawned, the music, the movies, the newspaper headlines. And Wright throws everything at these vividly evoked depictions of Soho past, and Soho present. The film was shot in London, and it shows. Some of the cultural references might be a little on the nose – posters for Sweet Charity and Breakfast At Tiffany’s are clear signposts towards the seedier aspects of swinging Soho – but that hardly matters. The audience which will likely embrace Last Night In Soho with enthusiasm is not there for the subtlety, it’s there for, among other things, the lurid thrills, banging soundtrack and a glorious supporting turn from the late Diana Rigg.

This is Wright’s most female-led film to date, and the stronger for it. Along with Rigg, fellow 60s face Rita Tushingham gets a supporting role, as Eloise’s concerned grandmother. Synnøve Karlsen is enjoyable as fashion student and whirlwind of self absorption Jocasta. But the film is powered by the well-matched dual lead performances from Anya Taylor-Joy as Sandie, the 60s siren who finds that the grey-faced men of Soho have little use for her dreams of singing stardom, and Harcourt McKenzie, as the fragile country mouse who, thanks to her psychic gifts, has a ringside seat to Sandie’s downfall, then finds herself haunted by the hungry ghosts of Sandie’s past. Ultimately the villain of the piece is not necessarily the person with the blood on their hands, it’s the misogyny which is as commonplace in 60s Soho as its sharp suits and sewer rats.

Music has always been an integral part of Wright’s storytelling, but while it was perhaps foregrounded in Baby Driver, it’s more successfully integrated into the fabric of the film here. Take the use of Cilla Black’s ’You’re My World’, which heralds Sandie’s entrance into the Cafe De Paris and Ellie’s first glimpse of 60s London, just as the song kicks up a notch or ten into its barnstorming chorus. It’s a goosebump moment which makes the past seem almost more vividly alive than the present. In addition to the soundtrack choices, there are period techniques used elsewhere. References to looping psychedelic recordings like the Beatles’ ’Revolution 9’ are present in the sound design, which is increasingly crowded with overlapping voices from the Soho gutters while kaleidoscopic lenses facture the images, evoking Ellie’s increasingly shattered emotional state. And vinyl plays a key role in the film’s climax – fans of 60s music might want to look away at that point.