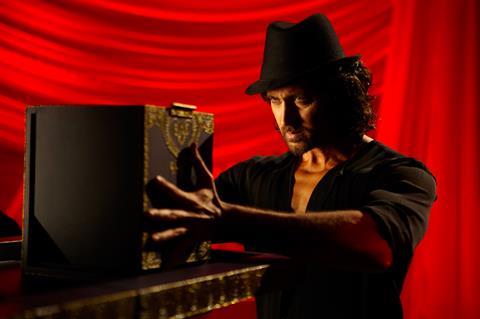 Sanjay Leela Bhansali, probably shaken by the abysmally poor box-office showing and sharp criticism of his earlier Saawariya, has not left anything to chance with his latest film Guzaarish.

Roshan, after a string of eminently forgettable playboy parts (Kites, Dhoom 2) is forced here to act with his face (except in a few flashback scenes where he is the dancing-singing magician!), and he does it remarkably well.

He has co-scripted, directed and even created music for it, and it largely works. The imagery is riveting - the alluringly lit-up interiors of a crumbling old mansion and the sunny, windswept, Goa landscape, where the story takes place, infuse light and shade into the story of a magician, Ethan Mascarenhas (Hrithik Roshan), whose triumph ends in tragedy.

For 14 years, he remains a quadriplegic, confined to his mansion, looked after by an extraordinarily beautiful and dedicated nurse, Sofia D’Souza (Aishwarya Rai Bachchan). She neglects her own home and husband to feed and wash her patient, clean his bed-sores and scratch his nose.

Is she in love with him? Yes in a strange sort of way, sexually charged though she is. “These days, you only want to change my pajamas”, Ethan tells her in one of his frustrating moments.

His horribly mundane existence is relieved by Sofia’s arresting presence (“I wish you would wear short skirts, so that I can see your gorgeous legs” is one of his lines), and his lawyer-friend infrequent visits and his own radio-show, where he pep-talks fellow sufferers into looking at the brighter side of life.

But when Ethan decides to petition the courts to allow him to die, there is dismay and distress. Both the lawyer and Sofia eventually understand Ethan’s pain, and the lawyer begins an arduous legal battle to get him his right to die with dignity.

While the movie serves as a powerful appeal for euthanasia, the plot’s attempt to circumvent the law will clearly send out the wrong signal. This is one of the film’s most serious flaws. Others include the Bhansali formula of painting everything disbelievingly beautiful…. Rai Bachchan, despite being far more emotive that what she usually is, looks too dolled up to play the part of an abused wife and a nurse doing the most repulsive kind of work.

Roshan, after a string of eminently forgettable playboy parts (Kites, Dhoom 2) is forced here to act with his face (except in a few flashback scenes where he is the dancing-singing magician!), and he does it remarkably well, with Nafisa Ali as his mother ably complementing him in a work whose appeal would lie somewhere between the arthouse-festival circuit and the marketplace.