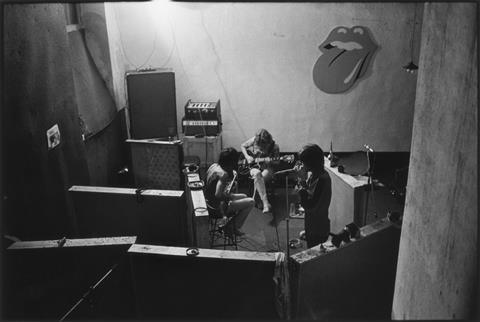 Much more of a niche addition to the Rolling Stones’ filmography than Martin Scorsese’s recent concert film Shine a Light, Stephen Kijak’s enjoyable but hardly life-changing TV-length documentary charts the year in 1971-72 when the Rolling Stones were forced to go into tax exile, first in the South of France and then in L.A., and the legendary album that resulted from this working, drinking and drug-taking vacation:Exile on Main Street.

Produced for the BBC, and airing on the broadcaster’s main terrestrial BBC1 channel on Sunday 23 May, Stones in Exile is a less cinematic product than the director’s previous music biopic, Scott Walker, 30th Century Man. It’s also one with a parallel marketing agenda which goes some way to explaining the involvement of band members Jagger, Richard and Watts on the production side. A remastered version of Exile on Main Street, with ten extra outtake tracks, has just been released by Universal Music. Excerpts from the documentary form part of the “Super Deluxe Box Set” version of the reissue – retailing in the UK for a cool £99.99. All this means that theatrical action is low down on the priorities of the film’s producers, and Stones in Exile is unlikely to score any; its presence in the Cannes Quinzaine is down to the South of France connection – and of course Mick Jagger’s promise to show up.

The decadent goings on at Villa Nellcote, the palatial residence that Keith Richards and Anita Pallenberg rented in Villefranche-sur-Mer from the spiring of 1971, have been recounted more than once – most recently by music writer Robert Greenfield in his 2006 book Exile on Main Street: A Season in Hell with The Rolling Stones. What Stones in Exile adds to the picture is the music. Tasty footage of recording sessions, some of it shot by Jagger himself on Super 8, is intercut with black and white pictures taken by French photographer Dominique Tarle – who went to Villa Nellcote for an afternoon and ended up staying six months.

The band members recount their memories of the chaotic sessions, which took place in the basement of Richard’s villa due to the lack of a suitable recording studio in the area. There were eight Stones for this album – the core group was supplemented by session musicians like saxophonist Bobby Keys, whose drawling Texan anecdotes provide some of the film’s most amusing moments. There’s also testimony from some of those who were just there for the ride, or the drugs, or the money. Actor Jake Weber, whose dad supplied Richards and others with drugs, remembers being the household’s official joint-roller; he was seven at the time. Talking heads interviews with fans of the album including Martin Scorsese and musician Jack White bookend the film (one of White’s reasons for loving Exile on Main Street so much is because “it really confused the journalists”).

What’s lacking is any real dramatic structure or investigative bite. A couple of the interviewees allude to things “getting really dark and wild” at a certain stage, but although Richards talks openly about his drug habit, the tensions, conflicts and descent into the abyss are disappointingly fudged – as perhaps was only to be expected given the producer/subject overlap. We’re left with a decent ‘making of the album’ documentary that will provide an hour’s enjoyable viewing for Stones fans and anyone fascinated by the survival of a group that kept pushing itself to the verge of self-destruction – and then taking a step back.
Production company: Passion Pictures Co (UK)
International sales
International sales: BBC Worldwide, (+44) 20 7323 9933
Producers: John Battsek, Victoria Pearman
Executive producers: Mick Jagger, Keith Richard, Charlie Watts
Cinematography: Grant Gee
Editor: Ben Stark
Music: The Rolling Stones