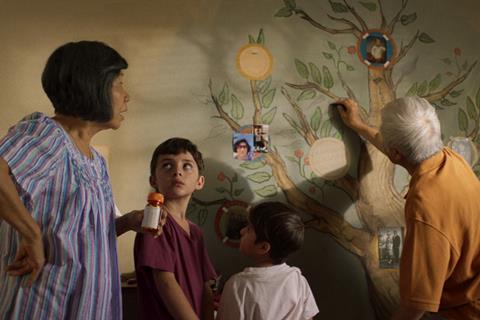 A child’s eye view of a migrant story, Los Lobos weaves a protective gauze of fantasy and escapism around the gruelling realities of life for a family newly arrived in the US from Mexico. A mother (Martha Reyes Arias) uses the promise of a trip to ‘Disney’ to persuade her two young sons that the long days they spend locked in a room in Albuquerque is the better life they had all hoped for. Strikingly photographed and appealingly acted by the two children, the film deftly blends fiction and documentary elements into a portrait of an immigrant community which shares some of the innocence and optimism of the kids at the heart of the picture.

Although dramatically understated, this is a film which should charm audiences on what is likely to be a healthy festival run. The playful touches of animation – reminiscent of the wriggling line drawings of Jeremiah Zagar’s We The Animals – and the blend of fiction with striking documentary shots of the real life migrant community in New Mexico might be enough to set this film apart in a theatrical market which is overcrowded with indie coming of age dramas and migrant stories.

It’s a personal story for director and co-writer Samuel Kishi Leopo. When he was five and his younger brother was three, his mother made the same journey from Mexico to Albuquerque on a tourist visa, travelling light and with the lure of a Disneyland visit applied as a balm for the homesickness. It’s this core of authenticity which sets Los Lobos apart from most other migrant stories, even as that authenticity dictates that a considerable chunk of the film is spent in a grim single room, with the children left alone and climbing the walls with boredom.

The generous widescreen cinematography takes in the big skies of the borderlands; full of either possibilities or threats, depending on which way you look at them. For the children, Max (Maximiliano Najar Marquez) and his younger brother Leo (Leonardo Najar Marquez), the journey is an adventure. They are oblivious to the suggestion to “Go Home” scrawled into the mirror in a truck stop restroom. But young as they are, they pick up on their mother’s plummeting spirits as they haul their belongings across town, looking for a place to stay. Eventually they settle for a grubby little dive owned by an elderly Chinese couple who take a kindly interest in the boys. The mother leaves her children alone with a list of rules – number two is never walk on the health hazard of a carpet without shoes – and sets out each day for work.

There’s an almost fairy tale quality to the idea of the two children imprisoned in a room, bound by rules which must be obeyed, day after day. And Leopo’s picture clutches at that element – the boys pass the long hours by creating adventures, executed in animated segments, for their imaginary alter egos, the ‘ninja wolves’. Their back story is similarly woven into fantasy: the father the boys barely remember “went away by lightbulb” according to an overheard conversation. The children envisage a magical alternate world, entered through a light fitting. The truth, we realise, is rather more depressingly prosaic.

When the boys finally leave the room, there’s a sense of freedom – the skies open up once more – but also of the chaotic threat of children running wild (The Florida Project is an obvious comparison). Hope comes in the form of dumplings and comfort offered by the Chinese landlady, and in a gently melodic acoustic score.