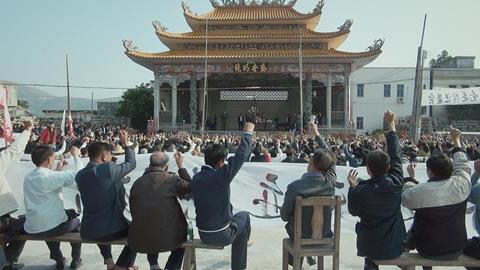 Charting a six-year fight against corruption in South China, 2020 Golden Horse best documentary-winner Lost Course shows how easily the quest for justice can falter even amongst passionate and determined crusaders. First-time filmmaker Jill Li details the situation in the fishing village of Wukan, in Guangdong Province, where townsfolk spontaneously rise up in protest after administrators illegally sell off fertile communal land by the sea, personally profiting while everyone else faces poverty. But as this lengthy yet also gripping film demonstrates, such underhanded bureaucracy never really goes away, no matter who is in charge.

Observational yet authoritative in its approach, Li’s film first paints an inspiring picture, then a dispiriting one. If the film was any shorter, viewers might get whiplash from watching its initial heroes struggle after they successfully remove Wukan’s self-serving powers-that-be and are elected themselves. Now showing at IDFA, Lost Course should receive further festival interest due to its continued timeliness. Watching a community champion the importance of free and fair elections, then lose faith in the fallout, is timely. So is the heavy-handed response to Wukan’s resistance given comparable scenes in Hong Kong.

Wukan’s uprising gained global media attention back in 2011, when villagers demanded the return of their land and violence ensued. Li’s film highlights one photojournalist, the New York Times’  Du Bin, and also shows the anti-corruption movement actively trying to raise international support. Divided in two halves, Lost Course first weaves through the protesting crowds as they take to the streets to voice their discontent. Their cause is further galvanised when, months after the initial September unrest, four activists are arrested. Village representative Bo dies in custody — apparently of a heart attack, but the townsfolk do not believe the official government explanation.

Lost Course tells much of its story through mass gatherings, including those staged both before and after the change of local leadership. Wukan’s inhabitants do not need a catalyst to keep fighting, but Bo’s death is a push onto the path to their first election in ten years. The documentary’s second half examines the aftermath, when neither substantial change nor compensation for the stolen land is forthcoming, causing hope to once again turn to anger.

Li returns to the same key figures time and time again, including the elderly Lin, who is voted party branch secretary and village director; the younger Hong, who earns a committee position but ends up resigning to start his own teahouse; and Xing, another youthful new official who keeps his own photography studio to make ends meet. Alongside other main players, they are never short on thoughts about their circumstances, but the film’s most incisive commentary hails from Wukan’s crowds. At first, protestors are undeterred by the government pushback, even voicing their willingness to lose their lives to the clash. A few years later, however, their chatter darkens. “Even the old leaders were better,” they mutter, adding, “they speak of democracy, but they just want power” .

Acting as her own cinematographer, Li’s visuals are as grainy and jumpy as is to be expected of hectic on-the-ground, fly-on-wall-style footage. Co-editing as well, she helps splice Lost Course into an urgent and energetic affair. Its title makes plain that there is no happy ending in store here, but nothing about this complex documentary veers in the wrong direction.