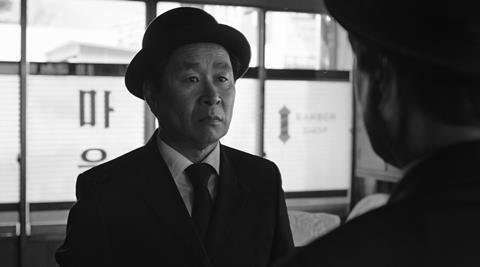 Lim Dae-hyung brings together a mix of delicate melodrama and Chaplinesque slapstick humour in this imaginative feature debut about a man suffering from terminal cancer who asks his son, an aspiring filmmaker, and his girlfriend to make a film he has written before he dies.

Beautifully shot in black and white, Merry Christmas… captures the melancholy of Mr. Mo as he comes to terms with his terminal illness while also reflecting on his past

Premiering at Busan in the festival’s New Currents section, the film’s accessible story combined with its moving and occasionally witty structure should see it find a home on the festival circuit. Locally, it seems set to become a crowd pleaser as it provides a fresh take on themes such as death and troubled relationships which are often found in Korean melodrama.

The film is split into five chapters, and begins by following Mo Geunsan or Mr. Mo (Gi Ju-bong) as he goes about his daily routine, from having his hair cut in a barber shop, to swimming at a local pool where he meets a lonely young woman called Ja-young (Jeon Yeo-bin), and going to a bar before heading home, where he is unable to sleep. Intercutting this is a visit to a medical clinic where it is later revealed that he is suffering from terminal stomach cancer.

During his restless nights Mr Mo begins to write a screenplay, moving the film into its second chapter where the focus switches to his son Stephen (David Oh) and girlfriend Yewon (Go Won-hee). The couple - who both appear to be fed up, not least with each other - head to Stephen’s hometown following a phone call from Mr. Mo.

Over beers at home, he tells them what is happening to him and suggests making a film together. Yewon sees potential straightway as a homage to Charlie Chaplin. Stephen, however, even though he wants to become a filmmaker, takes more convincing. They begin shooting the film as Merry Christmas….enters its third and fourth chapters, but the relationship between the trio becomes fraught as Stephen learns more about his mother and father’s relationship.

Beautifully shot in black and white, Merry Christmas captures the melancholy of Mr. Mo as he comes to terms with his terminal illness while also reflecting on his past. Yet the film’s upbeat score, comprised of acoustic guitar music along with the piano melodies that later accompanies the Chaplinesque short film they make, helps offset its more sombre moments with touches of laughter. Indeed, this short film, which is screened to those who know Mr. Mo at the end of the feature, is quite irresistibly affecting . Prior to this point, Lim Dae-hyung adopts a somewhat understated approach.

Gi Ju-bong is a character actor who has appeared in numerous films including Hong Sang-soo’s Right Now, Wrong Then, but he is a revelation here. Interestingly, his elevation comes at a time when other supporting actors Oh Dal-su (Oldboy) and Yoo Hae-jin (Veteran) have also taken on leading parts, albeit in more commercial fare. David Oh and Go Won-hee also both deliver authentic performances as the young couple. They both subtly capture their different characters in a relationship that has gone cold.