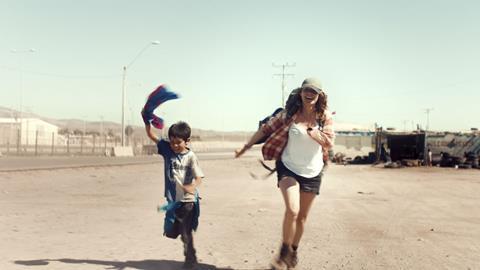 Longing, regret and the grief of a life not lived send a fortysomething woman on a ramshackle trek up and down Chile in director Marleen Jonkman’s first feature film. Loosely plotted and with a freewheeling slant that keeps with the lead’s directionless wander, Messi and Maud (formerly known as La Holandesa) works better as a scenic picaresque than a perceptive midlife character study, but all the same it marks a promising debut for the Amsterdam-based filmmaker.

Like its unsteady protagonist, the film is often content to lose itself in the rapture of the moment

Jonkman’s film made its world premiere in Toronto’s Discovery section, with local distributor September Film releasing it onto Dutch screens in 2018. Shot mostly in Spanish and rich in striking, location-based photography, the film could possibly make inroads with niche distributors in other European and Latin American territories, though a lax narrative footprint could keep it from ascending great heights.

After a painful decade of false starts and miscarriages, fortysomething couple Frank (Guido Pollemans) and Maud (Rifka Lodeizen) have put the dream of parenthood behind them and headed to the Andes to start anew. There, one final miscarriage – ending a pregnancy her genteelly boring husband was not even aware of – pushes the devastated Maud over the edge, and she takes off into the unexplored country, fleeing her husband, her past and her grief.

Riding as a stowaway, a hitchhiker and paying commuter, the enigmatic Maud crisscrosses Chile, offering different backstories, aliases and nationalities to whomever asks. Eventually she ends up riding with a boorish trucker (Daniel Candia) and his precocious son Diego (Cristóbal Farias), who prefers to go by the name of his favourite footballer (guess who). The older woman and the younger boy soon become unlikely travel companions when the trucker comes at them in a drunken fit and both are forced to flee.

As befitting a road movie about woman and a child with a restless need to move and nowhere really to go, the film never stays in one location or register for long. Writer Daan Gielis’ script occasionally hints at the deleterious psychological effects of Maud’s years of dashed hopes – by taking the young Messi from his father and not bringing him to his mother, the woman is kidnapping the boy in one way – but can then just as easily lean towards earnest surrogate-mother- surrogate-child bonding the next scene over, forgoing whatever weighty implications it has just raised.

No matter the register, Jonkman maintains such a coolly understated approach that most narrative beats land without impact; things just happen, and then we’re off to another locale. Though neither of the titular figures ever emerges as fully rounded characters, part of that seems intentional. Like its unsteady protagonist, the film is often content to lose itself in the rapture of the moment. In lieu of escalating dramatic tension, Messi and Maud uses those two figures as focal points in shots that revel in Chile’s endlessly varying and frequently stunning natural landscapes, with the occasional voice-over from Maud’s abandoned husband to remind us that this is both a ramble and an escape.