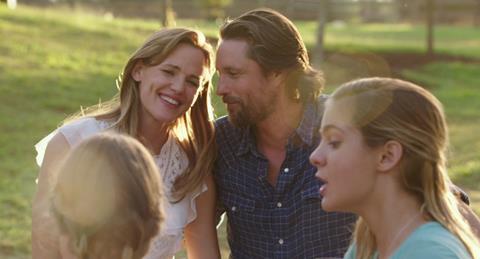 Less on the nose than the title makes it sound, faith-based offering Miracles From Heaven spins some bland but efficiently tear-jerking drama out of its true story-based tale of a fatally ill little girl, her devoted mother and a near-death experience that leads to a sudden, unexplainable recovery. Religious cinemagoers will be most easily won over by this latest production from Sony’s Affirm Films label, though there might also be some appeal for a broader – but definitely female-skewing - family audience.

A heaven sequence is moderately cheesy, but in the end the film comes up with an almost humanist definition of miracles and their cause.

Sony opens the film wide in North America on March 16, just in time for Easter and a couple of weeks ahead of faith-based sequel God’s Not Dead 2. In line with other releases in the genre, international performances are likely to be weaker, though the casting of Hispanic multi-hyphenate Eugenio Derbez should help in Latin America.

Adapted from a memoir by real-life mum Christy Beam, the film feels like an unofficial follow-up to Sony’s 2014 domestic hit Heaven Is For Real (with which Miracles shares two producers), only this time with a female perspective.

The screen Christy, played with impressive conviction by Jennifer Garner, is wife to a hunky veterinarian husband (New Zealander Martin Henderson, from Everest) and mother to three cute daughters. The family’s life in an idyllic Texas home is disrupted when middle daughter Anna (Kylie Rogers) is diagnosed with a rare, incurable stomach disorder. Christy gets Anna into treatment with a kindly specialist (Derbez) but eventually hears a gloomy prognosis.

The dramatic turning point comes when the ailing Anna falls headfirst into a hollow tree. Barely breathing when she’s rescued, Anna quickly recovers not just from the fall but from her illness as well, telling her parents about an out-of-body experience and a promise from God.

Mexican director Patricia Riggen (who made last year’s Chilean miners drama The 33) doesn’t find much dramatic structure for the story and the film ends up relying mostly on its performances. Garner, Rogers and Derbez all do likeable turns and Queen Latifah provides some comic relief as a lively waitress who befriends Christy and Anna.

The religious content is fairly subtle, with Christy initially doubting her faith and even clashing with some mean-spirited members of her own church’s congregation. The heaven sequence – complete with fluffy clouds, a pastel-tinted forest and the requisite bright white light – is moderately cheesy, but in the end the film comes up with an almost humanist definition of miracles and their cause.

Screenplay: Randy Brown, based on the book by Christy Beam