‘​Mothers Of The Revolution’: London Review 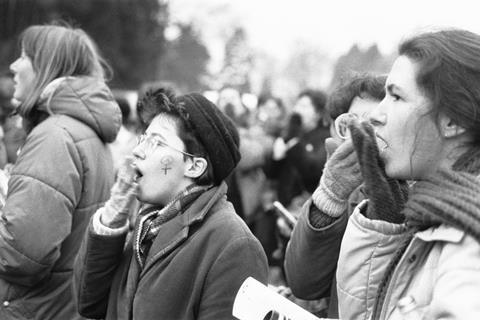 ‘Mothers Of The Revolution’

The British press derided them as harridans and harpies; the locals dismissed them as “malingerers and vagrants” with, God forbid “a lesbian agenda”; the police regarded them as fair game for brutality and bullying; their very presence unleashed a torrent of male aggression. But the women protesters of Greenham Common stood firm against intimidation and mockery, and, as this thoroughly researched and appropriately feisty documentary argues, they ultimately changed the course of our future. Informative without being didactic or preachy, Mothers Of The Revolution combines contemporary interviews, archive footage, dramatic reconstructions and animation to tell a story which started at a kitchen table in Wales and had ramifications which spread around the globe.

This is the third feature from New Zealand-based filmmaker Briar March, following There Once Was An Island (about climate change) and A Place To Call Home (about New Zealand’s housing crisis). Themes of social justice and protest are evident throughout her work, and she brings both empathy and rigour to the subject of the campaign against nuclear proliferation. What should recommend the picture to audiences beyond those at festival screenings in London and at the New Zealand International Film Festival is the fact that the film is more than a dry historical account — it’s an unexpectedly gripping story of rebellion, determination and sheer bloody-mindedness.

In the early 1980s, a young mother in Wales was one of many people alarmed by the UK government’s “Protect And Survive” campaign, which advised, among other things, using the four minutes between the warning and a nuclear strike to stack suitcases full of books to absorb the radiation. Rather than fret over whether it was better to die in the blast immediately or later from radiation sickness, Karmel Thomas took action. She was instrumental in organising the initial protest — a women’s march from Wales to Greenham Common, the proposed site of US nuclear missiles, where she and other protesters chained themselves to the fences.

The protest quickly gathered momentum — permanent camps were set up, joined by people like Chris Darke, a single mother and a millworker who says, movingly, “I feel like I was born when I went there”. Young mothers were not a group who traditionally had much of a voice at this time, but for a while they were heard. And then the news cycle moved on, shifting its restless sights onto the royal wedding and the pregnancy of Ching Ching the panda. The Greenham women realised that they needed to stay in the public eye, so they organised “Embrace The Base”, a day event at which women from around the country converged to sing and join hands in a human chain around the military base.

To a soundtrack composed of songs by rebel women (Siouxsie And The Banshees, Delta 5, X-Ray Spex, among others), the film tracks the spread of the movement internationally. The Greenham campaigners connected with their Soviet counterparts, including the courageous Olga Medvedkov, and learned about the horrific legacy of the Bikini Atoll tests on the Marshall Islanders. As the blustering superpowers teetered ever nearer to conflict, the mood of the public turned against the idea of a nuclear deterrent. After all, if a group of determined women with bolt cutters could get close enough to hang a banner on a nuclear silo, what was to stop someone with less-peaceful motives doing the same?

The film’s account of the journey towards the INF Treaty, which eliminated short- and medium-range nuclear weapons, is fascinating. But it’s in the details of the women’s personal journeys — and, in some cases, great personal sacrifices — that we find the picture’s considerable emotional impact.