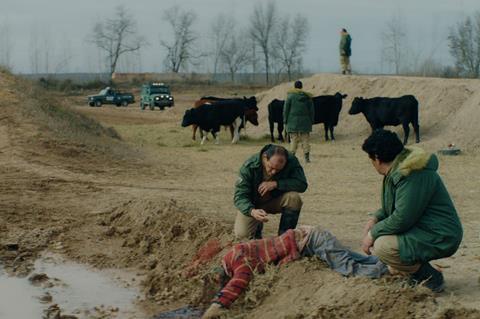 Alejandro Fadel wades into some dark, murky waters with Murder Me, Monster (Muere, Monstruo, Muere), a gory creature feature from the fantasy realms of Guillermo Del Toro with a nod to David Lynch along the way. Alternately intriguing, stomach-turning and mystifying, it has cult potential within a Midnight Madness-style genre audience seeking more offbeat fare.

Writer/director Fadel (Carancho, Los Salvajes) knows how to start a story. High in the Andes mountains, a woman stumbles into view. Her throat has been cut and is starting to gape open as she places a hand on the back of her head to prevent it detaching completely. Her efforts are wasted as she becomes the first victim in a series of murders in which heads are savagely torn from bodies. Anyone of a squeamish nature has certainly had fair warning of what is to come.

The investigation falls to rural police officer Cruz (Victor Lopez), and suspicion eventually falls on local resident David (Esteban Bigliardi). David claims to hear voices. Certain phrases and images tend to make him feel more aggressive. He believes that a monster is using telepathy to communicate through him. Are these the ravings of an unhinged mind or is there really a hideous monster on the loose in the mountains?

Fadel keeps you wanting to discover the answer as he builds suspense and fills in the eccentric character details that give the film its distinctive flavour. Cruz is a lugubrious figure with a reputation for his nifty dance moves. He also develops a highly personal involvement in the case. His deadpan superior has a tendency to pronounce cynical judgement on the more fanciful theories about what might be happening. The oddness of the individuals and the theories suggest some affinities with Lynch’s Twin Peaks.

Cinematographers Manuel Rebella and Julian Apezteguia add to the nightmare quality of the story with their use of the locations. Motorbikes go tearing through a pitch black night, criss crossing the gloom with their beams of light. Flares distribute a fug of red and green smoke on a hillside search in the pouring rain. A pursuit through the mountains on horseback feels like a classic western. The thick dark shadows and tinted hues add to the sense of a remote, oppressive area where evil could easily set up home.

There is also some impressive work from a make-up and special-effects team asked to conjure up severed heads, grisly wounds, jagged green gloop oozing from decaying bodies and, eventually, a creature, that could be either real or imagined, which is both familiar and unusual, B-movie cheesy and ferocious at the same time with its Alien-style rows of dripping razor-sharp teeth and slithering tail.

In Fadel’s vision of the world it appears that evil can infect anyone. That seems to be one of the morals of a story that is never entirely coherent or completely satisfying. The beginning may be striking, but the ending leaves you with the feeling that there was less here than first met the eye.