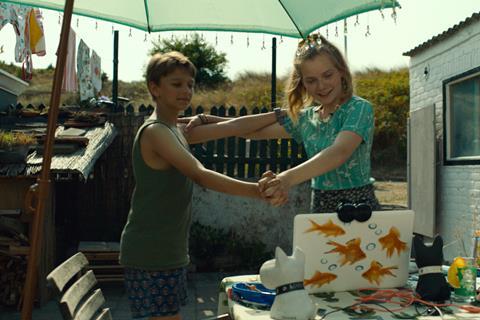 My Extraordinary Summer With Tess

A teenage boy meets his first crush and weathers his first existential crisis in My Extraordinary Summer with Tess, a warm-hearted all-ages drama that pairs a sunny disposition with soulful insights. As well as coaxing thoughtful performances out of his young stars, debut feature director Steven Wouterlood demonstrates a commanding handling of tone. Simultaneously light, contemplative and sincere, even when it lays its sentiment on thickly, this is a nicely balanced coming-of-age story that grapples with substantial matters in an accessible manner.

Sal Kroonenberg’s scenic cinematography not only makes a visual impact, but reinforces the feature’s thematic journey

Adapting Anna Woltz’s children’s novel, Wouterlood and screenwriter Laura van Dijk spin a tale about pondering mortality and finding meaning — one that trades in familiar notions, such as appreciating life’s brighter moments instead of dwelling on its bleaker realities, with infectious earnestness. Following its Berlin Generation Kplus premiere, the movie will also screen at the New York International Children’s Film Festival and, given the filmmaker’s television background (directing TV film Anything Goes to an International Emmy Kids Award and helming series Remi, Nobody’s Boy), streaming could provide a path to global viewers.

It’s with an amusing question about extinction that Sam (Sonny van Utteren) wonders about life and death: “Do you think the very last dinosaur knew it was the last when it died?” he asks. Introduced reclining in a casket-shaped beachside hollow of his own making, the holidaying adolescent has just realised that everyone he knows has an expiration date. Obsessed with the fact that he’ll likely outlive his parents (Tjebbo Gerritsma and Suzan Boogaerdt) and older brother (Julian Ras), Sam starts planning for the inevitable.

While Sam’s efforts to ready himself for a solo existence comprise the first life-changing aspect of his summer vacation on the Dutch island of Terschelling, the second comes courtesy of local resident Tess (Josephine Arendsen). They meet-cute as she’s preparing to welcome Berlin-based couple (Johannes Kienast and Terence Schreurs) to her mother’s (Jennifer Hoffman) holiday house, a deed grounded in her inventive excuses for her father’s absence.

In his first film role, van Utteren proves a naturalistic, likeable protagonist with relatable rather than exaggerated quirks. And although fellow feature debutant Arendsen plays the kind of self-assured but slightly chaotic outsider that’s become a stereotypical object of adolescent male affection, she’s similarly engaging, especially when she’s bouncing off her co-star.

My Extraordinary Summer with Tess is particularly affecting when it’s in quiet rather than breezy mode, and its central duo rise to the task of conveying complicated emotions in tender, telling glances. It helps that Sal Kroonenberg’s scenic cinematography not only makes a visual impact, but reinforces the feature’s thematic journey. In a movie about young hearts and minds trying to find their place in the world — one by accepting life’s losses as well as its connections, the other by exploring her origins — continually placing its searching characters amongst sandy dunes, sprawling hillsides and ocean expanses is a smart and fitting touch.

Screenplay: Laura van Dijk, based on the book by Anna Woltz