A solitary, fixed camera captures a Zurich in constant transition over seven years - for better and for worse. 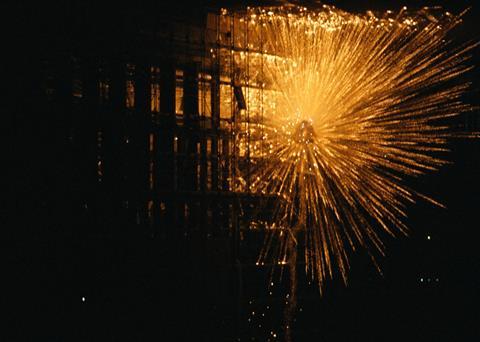 Filmed, on and off, from May 2013 until January 2020, and shot entirely from the windows of the Zurich studio of director Thomas Imbach, Nemesis is an account of a city reinventing itself. And not necessarily, Imbach suggests,  for the better. Over that time, Imbach watches as the old freight rail station is demolished and a new prison and police centre is constructed in its place. There’s a grim symbolism to this repurposing – a hub which connects to the outside world torn down and in its place, an institution designed to restrict movement.

In terms of its methodology, the film couldn’t be more timely

Imbach’s acute lens captures the eccentric flourishes of life which still goes on around the fringes of the site, and, in a narration, the film explores the experiences of migrants awaiting deportation who found themselves imprisoned in Switzerland. Initially deft and playful, the film juggles ideas and explores the spaces where history and the future collide. But, like the building project itself, Nemesis ultimately takes rather longer than necessary to come to fruition.

In terms of its methodology, the film couldn’t be more timely. It’s a voyeuristic, locked-down viewpoint which preceded the lock down itself. And as such, although the film could benefit from a tighter edit, it could be perfectly placed to fire the imaginations of the currently captive audience hungry for new content from streaming platforms. Looking forward, it could find further berths in documentary festival programs, but by that point, its USP might not be quite so intriguing to audiences who have themselves been staring out of their windows for months on end.

Shot on handsome 35 mm, sometimes through telephoto lenses which bring an uncomfortable intimacy with the unwitting subjects, sometimes through wide shots which seem to extend to the edge of the city and beyond, the film looks a treat. Imbach toys with the footage, slowing it down, reversing it. Most frequently, it is sped up – a briskly unsentimental approach to the destruction of the old building which diffuses the sadness of the stories which are lost along with the architecture. There’s almost a comic effect at times, the jawing mechanical diggers seem to be nibbling at the walls, their zippy movements reminiscent of children’s toys.

But under it all, there is a poignancy which builds as the film unfolds. How fragile are the threads which bind history to a geography which is being torn apart and rebuilt. Imbach recounts city legends and personal reminiscences. He talks of his lost opportunity to get to know a Canadian harpsichord maker whose workshop was flattened during the redevelopment, of his grandparents, of friends who died, of a niggling incident involving a frozen rabbit. There’s a passing observation which ties in with the somewhat obtuse choice of title. But gradually, the voices of the migrants, narrated by Milan Peschel, come to the fore, their tales of suffering juxtaposed with shots of the wildlife and the people of Zurich laying claim to the space where the station once stood. A temporary food market springs up; the hoardings turn into an ad hoc gallery space for street artists; a rangy fox picks over the crusted sores of the building site.

All of this is given texture by the use of sound, and in particular, a spiky, contrary score which frequently seems to be in conversation, and sometimes in dispute, with the images on screen.

Part of the festival’s International Competition, ‘Nemesis’ plays online in www.visionsdureel.ch between April 25 and May 3