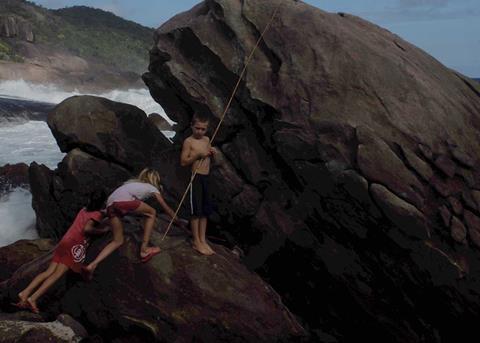 Life for the Caiçara communities of Brazil is shaped by the natural world. Inhabitants of the Atlantic coastal regions, they exist on the margins of society, rejecting “Gods and Kings”, the consumer impulse and conventional societal structures. This observational documentary portrait of one of the last remaining Caiçara communities is clearly a personal work for filmmaker Emilia Mello who, although separated from her subjects by her camera, finds herself repeatedly drawn into the sprawling extended family that she documents.

Of all the characters, there is a particular kinship with the child, Lucimara

The rhythms of the Caiçara are slow, lending the film a measured pace and slightly ragged focus. But there is a political subtext to the easygoing approach: this is a lifestyle that is increasingly threatened by rapacious capitalism and an unsympathetic political regime.

This first feature-length documentary from Mello is produced by filmmaker Roberto Minervini. And there is something of the intimate, lyrical approach of his films, particularly What You Gonna Do When The World’s On Fire, in this beguiling picture. But perhaps even more, the film is reminiscent of the work of Khalik Allah (Field Niggas) and other pictures which frequently incorporate the director into the worlds that they explore. It should find a receptive audience at further events specialising in documentary in its more poetic forms.

Fishermen haul their catch onto the deck of a trawler which pitches in the choppy water. “Hello beautiful,” rasps one of the men, nudging an octopus from the pile of wriggling quicksilver. On the shore, a wiry child with a shock of blonde hair and pink leggings scurries over the rocks, hunting for crabs. The sea is both a playground and a provider for the people who live at its edge.

We spend time in the candle-lit kitchen of Ismael, a sailor with a bright, glittering smile and a soothing song-like delivery. He reads hand-written poems and tells long stories about violent arguments with his partner; both have the same melodic swaying rhythm. And we follow a young pregnant woman to the hospital for a belated scan. Chided by the doctor for missing the first two scans, she shrugs. “I was told I needed a referral.” But it’s clear that the people of the Caiçara community don’t venture out of their insular world unless they have to. “I cried because that’s where I was born and that’s where I will die. And I can’t believe I will never see another place,” muses one character about their close ties with the land.

But of all the characters, there is a particular kinship with the child. Lucimara is the ringleader of a band of kids armed with knives and fishing hooks, who fashion rods out of bamboo and catch crabs with bait tied to the end of a stick. She’s fierce, impatient and completely open; the skittish camera echoes her endlessly curious gaze. She demands the participation of Mello in the scenes that she films, asking if the director would like to be her sister, squinting past the lens to the woman behind.

And it’s this intimacy which Mello invites, a recognition in her of a like-minded soul (the director grew up on a commune, with a similarly unconventional collective social structure) which makes the seemingly inconsequential shared moments of day to day life take on an added resonance.