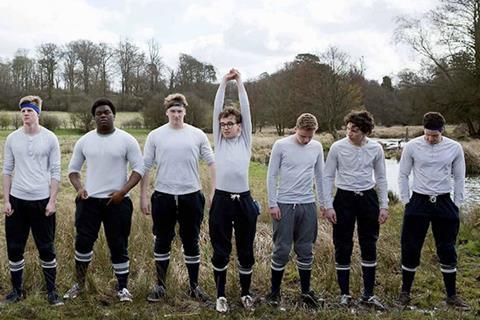 Taking inspiration from the story of Cyrano de Bergerac, but unfolding against the quintessentially British backdrop of an all-boys boarding school, the feature debut from director Toby MacDonald is a gently eccentric charmer of a film. At its heart is a precariously balanced love triangle between Agnes (Pauline Etienne), the daughter of the new French master; Winchester (Jonah Hauer-King), sports star and handsome thicko; and Amberson (Alex Lawther, adorable), the unpopular scholarship boy whose words connect the other two.

There is also a credibility to the depiction which suggests that the filmmakers are not strangers to the world they satirise.

The presence of Lawther, currently riding high after a starring role in the Channel 4 TV series The End Of The F**king World, will be key in connecting the film with younger audiences. But the picture’s appeal is by no means limited to the teen demographic. Older viewers will respond to sharp writing which offers a distinctive take on the somewhat overcrowded field of boarding school-set fiction films. Tonally, it’s closest to the appealingly sweet-natured romance of something like Gregory’s Girl; but there’s a skewering of the absurdity of public school rituals which borders, at times, on the Pythonesque.

Raised on a diet of cricket, rugby and the school’s own game, ‘streamers’ (essentially an organised brawl in a swamp), the boys are blissfully unaware of the irrelevance of the skillsets they are shaping. They are also unaware of the opposite sex, until the arrival of Agnes, daughter of French teacher and frustrated novelist Babinot (Denis Ménochet). Disgraced after inadvertently blocking a game-winning point in streamers, Amberson has been punished with ‘the bucket run’. And it is thanks to this, sodden and pyjama-clad, that he gets to meet Agnes and form a tentative friendship.

Agnes, meanwhile, thinks that she might have found her soulmate when she witnesses Winchester reciting rote-learned French verse. Amberson finds himself the intermediary – responsible for convincing Agnes that his fellow pupil has a poet’s soul and isn’t just “a labrador in trousers”. His motives are simple: he gets to interact with Agnes; and earns himself a temporary respite from the daily grind of humiliation that is school life for those at the bottom of the institutional ecosystem.

Missives between Agnes and Winchester/Amberson take the form of collages and scrappy homemade VHS video compilations. These have a lovely, roughly hewn quality which feels like something that might feature in a Michel Gondry film.

For all the preposterous pomposity of the school, which is mined very effectively for laughs, there is also a credibility to the depiction which suggests that the filmmakers are not strangers to the world they satirise. There’s an eye for detail here, both in the writing and in the design of the picture, which evokes the kind of clueless entitlement which is almost as terrifying as it is amusing.

Equally persuasive is Lawther as the eager-to-please underdog and the outsider through whom we view this insular community. And while the film ultimately parts company from the Cyrano de Bergerac story, its conclusion – slightly cumbersome in its editing, but uplifting nonetheless – finally frees Amberson from the yoke of peer approval.