‘One For The Road’: Sundance Review 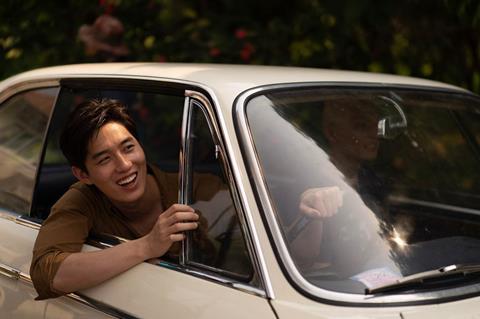 ‘One For The Road’

With expectations riding high after his 2017 high school cheating smash hit Bad Genius, director Baz Poonpiriya could have played it safe with another comedy-laced genre thriller. Instead, with Wong Kar-wai as producer, he has delivered what he terms a deeply personal film – a road trip movie during which two twenty-something friends, one suffering from cancer, travel around Thailand calling on girlfriends and ghosts from the past.

A tactile, colour-saturated film that is in love with cocktail culture

Road movies are allowed to meander, and One for the Road exploits the privilege to the full, shuttling between New York and Thailand, where buddies Boss and Aood criss-cross the country from Bangkok to Chang Mai, Korat, Pattaya and beyond, in a very cool 1960s BMW coupé. But Poonpiriya’s good-looking, classily shot third feature wanders in other ways too. It seems unsure of its audience, mixing auteur touches with broad commercial brushstrokes, Yet the overlong film is anchored and lifted by the double act of actor and Thai idol Thanapob Leeratanakajorn (aka Tor Thanapob) and fashion model turned actor Natara Noppartayapon (aka Ice Natara). Though their rapport breaks no new cinematic ground, it chips away engagingly, and unsentimentally, at the roots of male friendship and the question of how young men cope with their own or their friends’ impending death (not very well, it turns out).

One For The Road opens on Aood (Natara) sitting in that hip vintage coupé erasing all but a few contacts on his smartphone. Those left, it will soon be revealed, are the people he intends to visit in person while he still can, before succumbing to leukemia. Cut to New York, where ladies’ man Boss (Thanapob) owns and runs a cocktail bar. A call from Aood, received in mid coitus, summons a reluctant Boss back to Bangkok, where he is shocked not so much by his old buddy’s gaunt, bald appearance, but by the plan he has cooked up – to go on a road trip around Thailand to look up his former girlfriends and return things of theirs that he had kept. “Do I look like a taxi driver?” asks Boss, unimpressed but still unable to say no.

There’s enough here to keep us intrigued: they hit the road with a certain crackle in the air between them, one created not only by Aood’s unapologetic recourse to emotional blackmail but, we soon realise, by something unresolved in their past. As they visit one of Aood’s former girlfriends in Korat, another in Samut Songkhram and a third in Chiang Mai, One For The Road keeps plunging into New York flashback mode. This device fills in some backstory while giving voice to the women in their lives, setting little resistance circuits up to disturb the unspoken male entitlement of these two middle-class Thai lads.

But the film loses its way a little when, on a visit to his hometown in the beach resort of Pattaya, Boss begins reminiscing about his own great lost love – a pretty cocktail barista called Prim – and these memories come to life in one long flashback. Thai singer and actress Violette Wautier is excellent in the role of a young woman juggling emotional ties with a need for independence and self-affirmation, but that doesn’t prevent us from wondering where the story is going now that the road trip has stalled in the mega tourist hotel that Boss once called home. It will all be explained, but by this time the film has shifted from a young male bonding session into boy-gets-girl territory, as if it were trying to keep two separate audiences happy.

A musical soundtrack of 1960s and 1970s classics (Cat Stevens, Elton John) is neatly woven into the plot via the cassette tapes Aood inherited from his late radio DJ father. We’re drawn in too by the visual sheen of a tactile, colour-saturated film that is in love with cocktail culture, Thai summer nights and truncated romances that might have gone in another direction.

Where once it was only oldies who indulged in the sport of ‘what might have been’, social media and constant connectivity have embedded a kind of diffuse, unfocused nostalgia into the life of millennials the world over. Whether deliberately or not, One For The Road embraces this fuzzy nostalgia to the full.