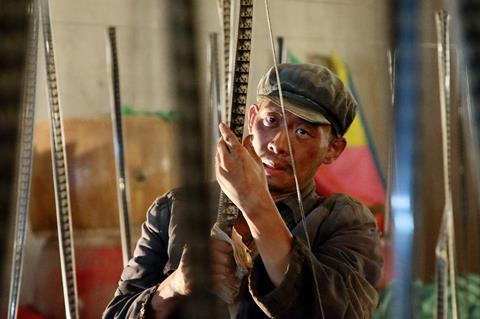 Zhang Yimou has described One Second as his “love letter to cinema” but this tale of an escaped prisoner who goes to great lengths to see a certain newsreel has so far been more notable for the controversy prompted by its Cultural Revolution era setting (1966-76). Amid rumors that members of China’s censorship bureau were uncomfortable with Zhang’s commentary on this politically contentious period, One Second was pulled from the 2019 Berlin International Film Festival mere days before its premiere with re-shoots eventually resulting in the stamp of approval. Considering all this strife, it’s testament to Zhang’s consummate craftsmanship that the released version is an emotionally satisfying celebration of how cinema is experienced both individually and collectively.

One Second looked set to restore Zhang’s festival circuit standing after the venerable Fifth Generation figurehead had spent much of the past decade trying to give China a global blockbuster with such pricey spectacles as The Flowers of War (2011) and The Great Wall (2017). Instead, it debuts in the domestic market where Zhang’s enduring name value and a recent tendency for audiences to give Hollywood imports short shrift means that it should enjoy solid returns comparable to the director’s recent locally focused productions Coming Home (2014) and Shadow (2018). Internationally, One Second is the type of accessible auteur cinema that the specialty market sorely needs to experience a theatrical resurgence in 2021.

In the early-1970s, a nameless fugitive (Zhang Yi) escapes from a Gansu Province labour camp, desperate to see a newsreel which contains a glimpse of his estranged daughter at her school. Arriving too late for the screening, he learns that he has one more chance as the programme is scheduled to be shown at another village the following evening. Spotting a scruffy young woman, ‘Orphan’ Liu (Liu Haocun) running away with one of the reels, he manages to retrieve it and treks across the arid desert to the next engagement.

After a game of one-upmanship with the persistent Liu, who has her own family -riented reasons for wanting to get her hands on some film, the reel is returned to the projectionist (Fan Wei). Unfortunately, the other reels have become unwound in transit and dragged through the dirt. Residents eager to watch the main feature, Wu Zhaoti’s wartime drama Heroic Sons And Daughters (1964), pitch in for massive clean-up operation, but the fugitive still runs the risk of being reported to the Security Division.

Although he is rarely associated with mirth-making, Zhang has demonstrated a flair for dark humour with two of his most underrated films, Keep Cool (1997) and A Woman, A Gun And A Noodle Shop (2009), the latter of which was also shot in and around the towering sand dunes of Gansu. One Second has some hearty laughs early on with the fugitive and Liu trying to outsmart one another in largely silent, slapstick fashion against the richly distinctive backdrop, then vying for the sympathy of a truck driver (Yu Yang) by opportunistically plying heart-wrenching half-truths. Dismissed on more than one occasion as a “bad element”, the fugitive is an archetypical tragicomic protagonist who is either unfairly misunderstood or amusingly fails in his hapless attempts to make amends, while Liu is an appreciably spiky foil.

Briskly paced by editor Du Yuan, the film has an unfussy, incidental feel that may surprise those anticipating a grand statement about the tumultuous time in which its director came of age. However, there are flickers of frustration, especially in the terrific lead performances which brim with anger. Typically keeping verbal exposition to a minimum, Zhang shows how a father-daughter bond tentatively develops between the fugitive and Liu, even if the atmosphere of the time entails that trust cannot be fully established. The same applies to the fragile bargain struck between the runaway and the outwardly avuncular projectionist, known as “Mr. Movie” for his unrivalled professionalism. Adroitly played by Fan, the kind-hearted projectionist reflects human complexities in the era of re-education as he tries to find a compromise between assisting the fugitive and remaining in the good graces of regional officials.

While there are a few jabs at the use of film as propaganda tool, Zhang’s recreation of his formative encounters with celluloid is nostalgic on the whole. Reels glisten as they are restored to viewable condition, close-ups of vintage technology pay tribute to its rugged durability and the shared viewing pleasure of the townsfolk is touchingly juxtaposed with the fugitive’s more intimate response. A piquant blend of comedy and drama, One Second is a welcome return to personal territory for Zhang which will prove particularly delightful for ardent cineastes.