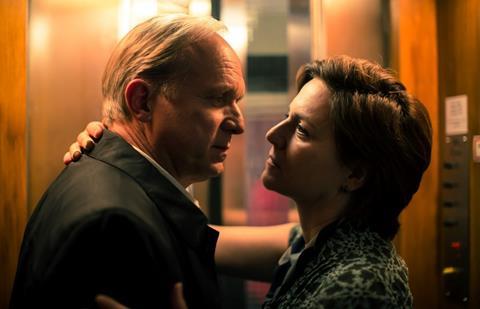 Loss of faith, domestic abuse, paraphilia and pornography: it doesn’t seem feasible to assign these themes to a romance, not least one that challenges the viewer to both believe a match between a painfully inhibited suburban housewife and an urbane psychologist and occasionally find it sweet.

Adapted by a German team from the novella by Scottish writer A.L. Kennedy, Original Bliss will prove a surprise to viewers without prior knowledge of the complexity and cheeky persuasiveness of the source material. Grounded by a trio of top-notch performances and with Kennedy’s repute on both sides of the Atlantic, this original, nimble film could follow its competition airing in Karlovy Vary with some deserved theatrical play. Distributors who routinely offer berths for physically explicit art house fare, such as Gasper Noe’s Love, could open their doors to a film that keeps its clothes on but is far more emotionally provocative.

When we first meet Helene Brindel (Martina Gedeck) she is in the grip of such chronic insomnia that it has developed into a routine: while her husband (Johannes Krisch) sleeps, she roams the house, listening to night-time radio, reading, squeezing his juice for breakfast and preparing his packed lunch, before falling asleep on the floor in front of the TV, where he finds her in the mornings and gives her a pat before departing.

Helene’s condition is a symptom of pronounced emptiness: the marriage is childless, without mutual understanding or possibly love; on top of that, she has lost her faith. Her husband, once disdainful of her religion, now holds her in contempt for losing it, and he has a violent way of showing his disapproval.

But Helene is searching for something. And when she hears the popular psychologist Eduard Gluck espousing his self-help notions on the radio, she’s hooked. She invents an alibi and travels to a conference in Hamburg to seek answers from the guru.

Taddicken has commented that his previous features Getting My Brother Laid and Emma’s Bliss deal in part with the question “do we deserve love?” So it’s not surprising that he was drawn to Kennedy’s story. At one point Gluck asks his listeners, “do we desire happiness, or do we desire the desire for happiness?”

Taddicken absorbs the film’s revelations into a mature, thought-provoking, often very funny reflection on what it means to need and feel love; moreover, just as this seems to have slipped into irreversible darkness, it becomes even more romantic.

This sleight of hand wouldn’t be possible without such nuanced performances. Gedeck can be a sultry actresses, yet for much of this film she drains her character almost totally of energy, lending Helene’s face a heartbreaking, yet also mysterious passivity. It could be alienating, were it not for the faintest flickers of life that make us want to know what’s going on behind the mask; one of the chief pleasures of the film is that we make that discovery at the same time as Helene herself.

Perhaps best known for Haneke’s The White Ribbon, Tukur shows a playful side here. Gluck’s intellect and humour – even when he’s at his most self-involved – allow both Helene and the audience to keep faith with his character. Even Krisch (Revance), in the unsympathetic role of the wife-beating husband, allows a certain helplessness to shade a more recognisable monster.

The film is shot with an elegance which is at odds with the frequent bleakness of the story, yet another device to keep us on our toes in a film that mines a rich vein of strangeness and grown-up romance.