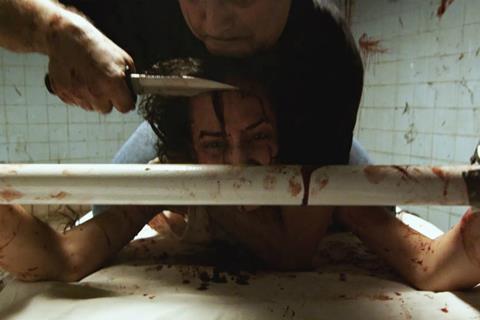 South America — a continent with several rich traditions of black magic; not to mention Catholicism, magic realism and a recent history littered with political and social upheaval —  has yielded a steady stream of genre fare. Interesting, accessible horror films have emerged from Uruguay (Silent House), Venezuela (The House at the End of Time), Colombia (Hidden Face) and Argentina (White Coffin).

To that growing list, Brazilian writer-director Samuel Galli contributes his assured debut feature Our Evil (Mal Nosso), a genuinely original horror movie that proves unpredictable, provocative, affecting and creepy. A shoo-in for a remake rights sale, this may also become a break-out cult hit with discerning fright fans already proven willing to embrace the subtitled likes of Martyrs, Let the Right OneIn or Under the Shadow.

Arthur (Ademir Esteves) is an intense, bald and imposing middle-aged guy, who wakes in the middle of the night to shop around for South American-based assassins on the Dark Net and finds a scalping/torture video posted by professional hitman/amateur serial killer Charles (Ricardo Casella).  (That Arthur finds it hard to look at the snuff clip is the first clue that he isn’t a clearcut villain.)

When Arthur meets Charles to issue sealed instructions for a very specific murder, the situation drifts even further out of the crime movie comfort zone as Arthur notes that the killer is distracted by a pair of available girls in the bar.  The situation becomes stranger as Arthur is shown in a more domestic light, making a birthday cake for daughter Michele (Luara Pepita).

Then, in an extended flashback, a much younger Arthur (Fernando Cardoso) copes with Sixth Sense-style psychic visions, dreams of  a circus where a ringmaster dispenses oblique spiritual wisdom and foretells demonic tragedy in the future. As Arthur interacts with unusual people who might be incarnations of angelic or demonic impulses, the mood shifts from gritty noir through fantastical horror to surprisingly affecting personal drama.

Esteves and Cardoso are outstanding as the protagonist at different ages,  all the more because the unfolding story means they have to hold back sides of Arthur’s character until his grand scheme (which runs to a truly shocking act) is completely laid out.  Initially, a seeming monster, Arthur emerges as something like a hero — but viewers will have to take a hard road with him towards redemption.