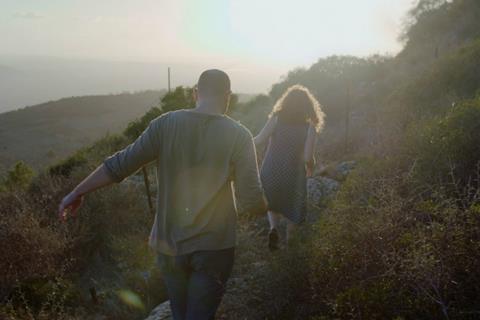 In director Asaf Saban’s feature debut, a city-dwelling couple learns the eternal lesson that “wherever you go, there you are” when they opt to flee the anxieties of Tel Aviv only to find all their latent stresses waiting for them at their new countryside residence. A thoughtful if familiar relationship drama, Outdoors benefits from an incisive grasp of its two lead characters’ inner lives and an acute sensitivity for their many sources of angst.

Saban has previously found success with shorts like Mapping and On Leave; both films have won prizes and acclaim at several international festivals, and that could prompt additional festival curiosity for this feature length outing. The film’s fairly limited scope might, however, make it a better candidate for international VOD platforms, specifically those targeting upscale audiences looking for textured adult narratives.

Outdoors opens on shots of an architectural pre-viz programme controlled by mid 30-something couple Gili (Udi Razzin) and Yaara (Noa Koler). We hear their voices as they weave around 3D renders of their yet-to-be-built home, fantasising about the idyllic new life that awaits them. In one clever opening salvo, Saban establishes both his leads’ high hopes and the fact that, for all intents and purposes, such optimistic aims are mostly make-believe.

The film then cuts to a vacant construction site  perched high in the northern mountain region of Galilee, and stays there all the way through to the end. Set over the course of a calendar year, Outdoors remains fixed in one place; simultaneously tracking the construction of Yaara and Gili’s prefab home against the deterioration of their relationship in an intrinsically episodic structure.

Yaara and Gili are late-Gen-Xers, married with an almost 8-year-old daughter, but only now moving into adult life. She has only recently finished her occupational therapy studies – a professional path she assumed after having pursued a career as an artist – while he is still struggling to make it as a playwright. Both bristle against this new and seemingly irrevocable assertion of placid adulthood, a situation made all the more piercing for the pregnant Yaara, who is returning to the mountainside hamlet where she grew up.  As a fellow one-time-escapee neighbour remarks, “I never thought I’d be back here”.

The loose narrative follows the pair through a number of interactions with friends and family, each one turning around another nearing-midlife source of tension. Outdoors tackles everything from professional disappointment and family rivalry to financial unease and unresolved sexual infatuation, without ever laying it on too thick. By following that elliptical path, the film eschews simple marital melodrama for a more wide-ranging generational portrait.

Saban shot the film over a similar yearlong timeline, incorporating the very real construction of the house alongside actress Koler’s true-life pregnancy, and the finished product maintains a freewheeling, improvisatory air.  As the main couple’s relationship fractures, Saban and cinematographer David Rudoy make witty compositional use of the house in progress, employing the various empty windowpanes and missing doors to separate the two leads in the frame. While these scenes from a marriage owe a debt of gratitude to Bergman, the warmly lit, open-air photography gives them their own unique tag.