An anticipated debut from the Netherlands 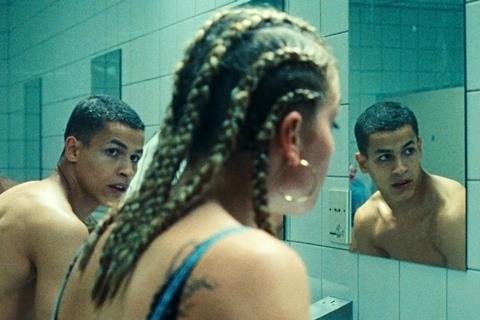 Considered a talent to watch after the short films Even Cowboys Get To Cry and A Hole In My Heart, Dutch writer/director Mees Peijnenburg delivers on that promise with his soulful debut feature Paradise Drifters. The story of three young people adrift in a cold, uncaring world is distinguished by the vibrant cinematography of Jasper (Monos) Wolf and expressive performances from a cast led by notable newcomer Tamar van Waning. Extensive festival invitations should materialise after its Rotterdam/Berlin premieres.

Developed during a Cannes Cinefondation programme, Paradise Drifters introduces us to three young adults who have no sense of security or belonging in their lives. Chloe (van Waning) is pregnant. The relationship with her mother is revealed in a single encounter marked by anger and violence. Naive Lorenzo (Peijnenburg regular Jonas Smulders) hero-worships his feckless older brother Ivan (Joren Seldeslachts). He will do anything to secure a better future for them when Ivan is released from prison. Anxious, introverted Yousef (Bilal Wahib) seems ill-prepared for the moment he leaves a care home and enters the world.

Lorenzo’s decision to act as courier for an unspecified shipment to Marseille takes the story on the road. The three random lives intersect with Chloe seizing the initiative as she bullies her way into Lorenzo’s car and secures a lift for her and new companion Yousef. The journey subsequently continues to Barcelona where Chloe has been offered accommodation.

There is a dynamic energy to Peijnenburg’s storytelling as he occasionally fractures the timeline and lets the story fold back on itself to reveal some hidden truth. Sharply edited fades to intense black create a sense of watching brief snapshots from these lives during a journey that is marked by danger, betrayal and death. There is also a sense of the rare, genuine emotional connection that develops between Chloe and Lorenzo as their friendship grows in the face of shared adversity.

The plight of homeless young adults sounds like the stuff of grim social realism but Paradise Drifters is distinguished by its sense of hope. There is a documentary-like edge to Peijnenburg’s depiction of the tensions in the banlieues of Marseille or the frequent images of cardboard boxes and folded blankets that mark the invisible, ghostly presence of the homeless on our streets. Chloe and Lorenzo’s determination and the character-forming big decisions they take give the material a positive spin.

Moving from dark, claustrophobic interiors to the piercing white light of sun-filled city streets, Jasper Wolf’s cinematography has a depth and textures that really add an edge to the storytelling. When the story moves onwards to Barcelona, it has the feel of a road movie and echoes of Wim Wenders collaborations with Robby Muller.

Peijnenburg clearly has great trust in his actors and their ability to convey emotion without dialogue. Wolf frequently frames them in intimate close-ups or lets the camera linger as the sense of achievement and disbelief that Lorenzo has pulled off a job plays across Jonas Smulders face or Tamar van Waning’s Chloe watches with wry amusement and detachment at the foolishness unfolding around her. Her fierce, decisive Chloe is the beating heart of a thoroughly involving story.