Reggie Yates takes his crew on a fun-filled trip around London after hours on New Year’s Eve, 1999 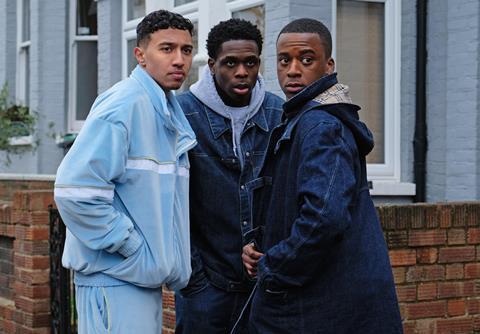 Careening around London in a bubble of high spirits - and a yellow Peugot 205 nicknamed the Custard Cream - the three heroes of Reggie Yates’ feature debut Pirates are 18 year-old boys in search of a New Year’s Eve party to turn over the Millennium. They dabble in pirate radio, meaning the film’s soundtrack is banging like it’s 1999, but mostly they’re former schoolfriends on the brink of an uncertain future in this ebullient road trip which bounces from North to South London in the space of a joyous day and night.

Fresh and familiar, wholesome yet a little bit punky, young yet set 21 years ago

Backed by BBC Film and the BFI, Pirates is very much a set of archetypes - of character, plot, but also a modern rendition of a very British clean caper which might once have starred The Beatles or Spice Girls (or even Cliff Richard before them) in buses and black cabs or even a submarine. Although he’s behind the camera, Yates is the only name known to audiences, yet that lack of expectation seems to act as a spur to the film’s exuberant actors who should make Pirates a wide proposition when it opens across the UK and Ireland through Picturehouse on November 26. An all-Black and Asian cast and millieu are intrinsic to the story, but the domestic appeal should transcend any categorisation beyond young (and young at heart).

Admittedly, Pirates is stretched, even at a lean 80 minutes  — the story revolves around finding tickets to a sold-out New Year’s Eve Millennium garage party at Twice As Nice in Vauxhall, and these are sourced pretty early on (and lost again). Much of the racketing around London happens either inside the Custard Cream or by drone shot at night (Covid-19 halted initial production after 10 days). The production seems as cheerfully short of cash as its heroes.

These schoolfriends know it’s not just the turn of a century, but the end of an era for them as their destinies diverge: the drama about one returning after a term at college to resign as manager of the band they formed together is a little boilerplate, and, truth be told, low-stakes.  Yet everyone commits to Pirates as if it’s the first time this story has been told, and in a way, that’s true. A joyous feature film centring around British Black and Asian male teenagers whose problems are exactly the same as every other teenager in the country makes it revolutionary within that familiar framework.

The performances drive the piece, and Yates presents the viewer with the classic comic trio. Studious, deeply unfashionable  Cappo (Elliot Edusah) is the straight man to goofy Kidda (Reda Elazouar), from the school of Chico Marx via North London, and the swaggering yet insecure Two Tonne (Jordan Peters), the engine of the friendship. Cappo has just returned from university to discover that the garage band they formed together is on the brink of success: his former schoolfriends want him to push ICC to the next level, but Cappo wants to cut his ties.

Romance comes through Two Tonne’s crush on Sophie (Kassius Nelson), whom he invites to the sold-out Twice is Nice party - with no tickets, or any money to pay for them. Now the crew has to sort out both access to the gig of the century and the clothes to wear there - eventually the route ends up going by Kidda’s dodgy uncle Ibbs (Yousef Kerkour), the aggrieved Megaman (Aaron Shosayna), and a high-end clothes store which is wall-to-wall Moschino.

As the Custard Cream lurches from interlude to interlude (including, for no obvious reason, an ‘urgent’ stop at a barber shop manned by Tosin Cole), grime and garage dominate the soundtrack, while a Simply Red interlude is used to comic effect. With kudos to both casting (Shaheen Baig) and costume (Nat Turner), Pirates manages to feel both fresh and familiar, wholesome yet a little bit punky, young yet set 21 years ago. (Production design by Francesca Massariol gives a nice sense of how those times and fashions are coming around again – although the Motorola flip phones seem securely consigned to the past, Kidda’s Tamagotchi adds some pings to the score.)

Sure, a few gags don’t land, but Yates moves fast and has more where they came from - with any luck, maybe even enough for a sequel. Pirates are known for their stealth and strategy (a bit of ruthlessness also helps): opening weekend should tell whether his game plan has paid off.