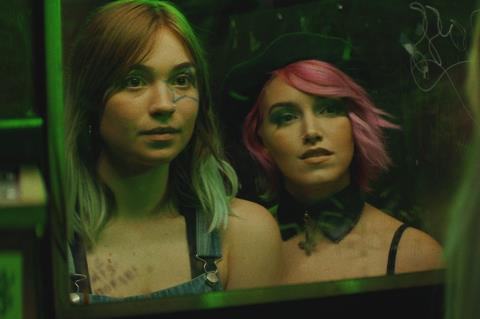 The real-life alternative music scene of Columbus, Ohio provides a treacherously hip backdrop to this intriguing psychodrama about fitting in and finding a voice. Introverted and gauche, Lennon (Sylvie Mix) is permanently on the outside, looking in on a world which seems far beyond her social reach. But Lennon is nothing if not enterprising: hosting her own podcast focused on the city’s underground culture provides an entree into the cool circles, at the centre of which is Bobbi Kitten (playing herself), the charismatic lead singer of the band Damn The Witch Siren. A friendship develops between the two, only to be torpedoed when it becomes clear that the voice and identity that Lennon has started to adopt is not her own — a cardinal sin in a scene which prizes credibility and originality above all else.

First-time feature directors Noah Dixon and Ori Segev are clearly familiar with the world in which Poser is set — they cut their teeth shooting music videos — a fact which is evident both in the authenticity of the film’s milieu and in the occasional sly digs that the filmmakers take at that world. This persuasive sense of a scene, together with the film’s appetising premise — a grungy Single White Female punched up with the exposed neediness of the podcast generation — makes for a picture which should find further audiences on the festival circuit and may connect with hipster-adjacent arthouse audiences. Oscilloscope holds North American rights.

There’s much to admire here, but perhaps the film’s main achievement is the delicate balance struck with the central character. Newcomer Mix is a magnetic presence, and yet she makes herself convincingly invisible, all watchful dark eyes and hunger for wisdom and validation, a wraith lurking just outside the conversations of the in-crowd. Lennon is wildly pretentious — she discovers new bands in racks of vinyl in independent record shops, “tucked away, hidden from shallow people who don’t appreciate good music.” But she is driven by a fierce and genuine passion, forcing herself into rooms full of smoke and judgement, just to be near the creators.

To be sure, Lennon can be off-puttingly stalkerish about the way she haunts her targets, recording their conversations on her phone and then parroting their words. At the same time, we can’t help but sympathise — she’s just a young adult, after all, who is groping around to find out who she is. And like many jejune half-formed kids, she is trying out other people’s opinions and identities to see what fits. She just takes it a little too far.

As is befitting a film in which music is the beating heart and is incorporated throughout — real bands, notably the all-girl trio Wyd and Bobbi Kitten’s duo Damn The Witch Siren, perform their own music — rhythm and repetition is crucial. A brusque sequence of shots capturing Lennon’s soul-crushing job in a restaurant kitchen is repeated numerous times; lines that she has picked up like crumbs from the cool people become a refrain, losing their meaning with each echo. “I want to push myself out of my comfort zone,” she says blandly. But in a way, that’s what Poser succeeds in doing rather effectively with the audience — its rhythms incrementally change our perception of Lennon, from an innocuous wallflower into something resembling a threat.