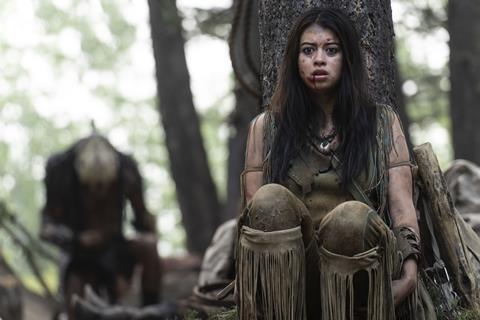 A young Comanche woman becomes locked in a battle to the death with a vicious interstellar warrior in Prey, a solidly entertaining addition to the Predator franchise. Setting the action in the early 18th century on the Great Plains of North America, director Dan Trachtenberg delivers gripping suspense sequences, complete with agreeably gruesome kills, which juxtapose the landscape’s rugged beauty with this extraterrestrial hunter’s brute savagery. Amber Midthunder gives this sometimes cheesy affair welcome grit, staring down the Predator with compelling ferocity.

There’s something oddly comforting about the simplicity of this long-running cinematic beast, burdened by neither a backstory nor a complicated narrative arc

Streaming worldwide through Disney+ (and Hulu in the US), Prey doesn’t feature household names in the cast, although the picture’s true star is that iconic alien, who first horrified audiences back in 1987 when Arnold Schwarzenegger and friends tussled with the monster. This is the first feature redo of the property since 2018’s woebegone The Predator, and while it seems unlikely that this passable new instalment will jumpstart franchise interest, nostalgic genre fans may enjoy one more go-round as the fearsome creature dispatches a fresh crop of victims.

It’s 1719, and Naru (Midthunder), a member of the Comanche Nation, is determined to prove herself worthy of being included in her tribe’s hunting parties, although her older brother Taabe (Dakota Beavers) insists she’s too inexperienced. Thanks to her superb tracking skills, she quickly deduces that a new species has arrived on the Great Plains — something bigger and deadlier than a bear or lion — and soon she and her fellow Comanche are fighting a Predator (Dane DiLiegro), whose lethal technology far surpasses their crude axes and bows and arrows.

Trachtenberg (10 Cloverfield Lane) brings the Predator franchise back to nature, recapturing some of the first film’s terror while substituting thick forest and picturesque plains for the original’s steamy jungle. (Prey was shot around Calgary, with cinematographer Jeff Cutter making good use of fog and open spaces.) The film capitalises on the drama inherent in what seems to be a lopsided showdown between Naru’s primitive weapons and the Predator’s high-tech arsenal, although as we’ll soon learn, this resourceful young woman has long been accustomed to being underestimated.

Midthunder is a scrappy, steely presence, which helps elevate her one-note character. (Naru’s fellow tribesmen frequently belittle her because she’s a woman, which in turn provokes her to demonstrate she’s as fierce as any of them.) Prey starts off slowly as it inelegantly establishes this gender imbalance and the inner workings of the Comanche tribe, but once the Predator touches down on Earth, things escalate quickly.

The film’s title is a clue to the script’s over-riding theme as we observe how, in the natural world, one species is often hunting another: wolves chasing bunnies, snakes feasting on mice. As the dangerous alien arrives in this delicate ecosystem, Prey ironically notes that, for native peoples such as the Comanche, the Predator is just another invading force, the monster’s mercilessness echoed by the arrival of encroaching French fur trappers with their guns and colonialist tendencies.

That commentary is effective, albeit on-the-nose, adding a little texture to what is otherwise an efficient series of B-movie action scenes, with plenty of screaming, mutilated victims laid to waste by the Predator. (It’s especially appealing to watch the creature kill both Naru’s dismissive male cohorts who never took her seriously and the arrogant Frenchmen who think this land is theirs to conquer.) Trachtenberg crafts clever setups, giving Midthunder the space to make Naru a rooting interest as her quick thinking and unflappable cool serve her in good stead while those around her lose their heads — sometimes literally. And the film is certainly not above resorting to cheeky fan service, with one of the original picture’s most infamous lines repeated here for maximum groan impact.

As for the Predator itself, Prey is its seventh feature, including two Alien Vs. Predator crossover pictures, land it looks as frightening as ever. There’s something oddly comforting about the simplicity of this long-running cinematic beast, burdened by neither a backstory nor a complicated narrative arc. Making unholy clicking noises and slaughtering everything in sight, slyly incorporating invisibility to better sneak up on its prey, the Predator admirably continues to operate with blunt precision — an attribute Prey tries its best to emulate.