At the heart of Rampage lurks an agreeably junky B-movie: can The Rock excavate it? 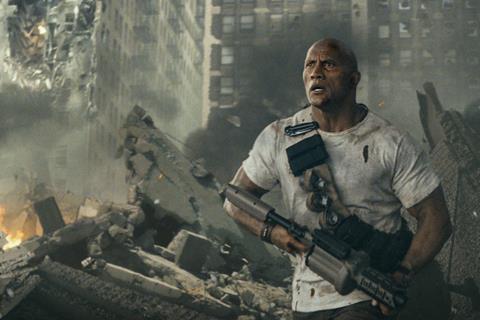 The gargantuan critters are dwarfed only by the derivativeness in Rampage, a clunky spectacle that, like many Dwayne Johnson vehicles, is elevated by his charismatic presence but not enough to recommend it. Based on a video game but more broadly inspired by the city-levelling demolition derbies that have become de rigueur for modern action films, director Brad Peyton’s mildly diverting entertainment plays like a second-tier summer blockbuster relegated to spring, where the competition is slightly less cutthroat and the expectations significantly diminished.

Johnson flashes the same effortless, self-deprecating appeal that’s always been the hallmark of his work

Slated for release on April 11 in the UK and April 13 in the US, this Warner Bros. effort will try to lure action audiences in bulk before another fearsome rampaging beast, Avengers: Infinity War, arrives in theatres. Johnson has been on a commercial hot streak of late thanks to the Fast And Furious franchise, as well as Jumanji: Welcome To The Jungle (approximately $946m worldwide) and San Andreas ($474m), and surely his fans will come out to see his latest exploits. But Rampage’s reheated pyrotechnics may not produce strong word-of-mouth.

Johnson plays Davis, a San Diego primatologist who works with George, a rare, sensitive albino gorilla he has cared for since infancy. But after an explosion on an orbiting space station unleashes a dangerous serum that can mutate animal DNA, George is transformed into a super-sized beast with a nasty temper whom Davis can’t control. Teaming up with Kate (Naomie Harris), a geneticist who has information about the serum’s origins, Davis must try to keep the government from killing George — quickly realising that other dangerous predators have also been affected across North America.

Reteaming with Peyton, who directed him in San Andreas, Johnson flashes the same effortless, self-deprecating appeal that’s always been the hallmark of his work. There’s a cheerful silliness to Rampage’s clattering carnage that can be intermittently fun — especially when Peyton unveils the giddily gruesome havoc that a gigantic wolf can wreak as it tears through a forest devouring heavily armed soldiers. But the movie’s occasionally tense moments quickly take a backseat to a more jokey tone, which overplays the ludicrousness of this story of massive monkeys, colossal crocodiles and a wry Rock.

The original 1986 video game allowed players to control the different mammoth beasts, who tried to destroy a metropolis while being attacked by military vehicles. The movie’s four credited screenwriters borrow that basic premise and graft standard big-budget sequences onto the narrative, settling for clichés that evoke everything from the King Kong pictures to Pacific Rim to Gravity. Rampage is a mishmash of blockbuster tropes — right down to the titanic, violent final showdown between Davis and the mutated animals in a conveniently evacuated Chicago — but Peyton displays neither the wit nor the ingenuity to add much to the mix.

Johnson’s caring, distant Davis — he prefers animals to people, who have always let him down — has a nice rapport with George, and the actor believably interacts with the CG creation. His interplay with his human co-star Harris is almost as fluid, although any shortcomings are largely the fault of a script that reduces most dialogue exchanges to screamed exposition and tedious backstory.

At the heart of Rampage lurks an agreeably junky B-movie — albeit one with a blunt pro-environment message — and the supporting cast do their damnedest to excavate it, particularly Malin Akerman as an icy villainess whose nefarious corporation concocted the serum. Unfortunately, the cheeky overacting is far more awkward from the likes of Jeffrey Dean Morgan, a government agent who saunters around the screen like an Old West cowboy, talking in painfully forced good-old-boy idioms.

In the last 15 years, Johnson has emerged as one of Hollywood’s more unlikely but consistently charming big-screen presences. The former wrestler, who went by The Rock, may have a hulking physique, but his light comedic touch and willingness to deflate his macho persona have positioned him as one of the funniest and least assuming action heroes. Rampage has a clever joke at its core — an actor as physically imposing as Johnson is in a movie in which his towering animal cohorts easily overshadow him — but the filmmakers rarely find much that’s humorous about that scenario. The film has Johnson’s brawn but not enough of his brains.