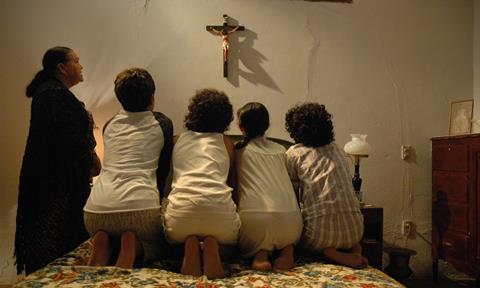 The 1910 Mexican Revolution, which overthrew dictator Porfirio Diaz, completely changed the structure of a feudal and theocratic society. A century later, despite the country’s many problems, Mexicans are a justifiably proud people, and their film artists share their enthusiasm. Diego Luna and Gael Garcia Bernal’s company CANANA and their producing partner Pablo Cruz are the main forces behind Revolucion, a portmanteau directed, for the most part, by the best and brightest of the post-Cuaron/Inaritu generation.

After his poorly-received debut feature Deficit, Gael Garcia Bernal delivers a well-made, substantial short about the dangerous confusion between symbols and the concepts behind them

With 10 episodes taking a state-of-the-nation snapshot over a brief-for-the-format 105 mins, Revolucion is that rarity: a mostly successful omnibus project that could be well received critically, should become a staple of the festival circuit, and stands a strong chance of modest commercial success in Spanish-language markets.

The two most impressive segments bracket the film. They are as different as night and day and point to the diversity of styles and scripts on display. Revolucion opens with The Welcome Ceremony, by Ferndando Eimbcke (Duck Season, Lake Tahoe). It is shot in black and white, takes place in a small Mexican village, and only obliquely addresses the subject of revolutionary homage. A small orchestra prepares a welcoming ceremony. Dry comic relief is provided by an off-key tuba player who just can’t stop practicing. Ultimately no one arrives for the event, but this odd fellow persists anyway. The political metaphor is apparent.

The final short , 7th And Alvarado, is shot in seductive slow-motion and color, and set in Los Angeles. It is directed by experienced US-based film-maker Rodrigo Garcia, whose features include the upcoming Mother And Child. Mexican residents of one barrio, who walk in front of charmless stores, cell phones in hand, are suddenly joined by revolutionaries from a century ago on horseback, as if this were an episode of The Twilight Zone.

Surveying the empty legacy of their brave battle against formidable odds, their eyes express a mild melancholy that is devastating for the audience. That the film ends on such a note of realistic pessimism is the flip side of Eimbcke’s optimistic musician, who sits alone, puffing away even when the screen turns black.

After his poorly-received debut feature Deficit (2007), set on a wealthy estate, with superficial twentysomethings flitting around mindlessly, Gael Garcia Bernal surprises here with Lucio, a well-made, substantial piece about the dangerous confusion between symbols and the concepts behind them. A grandmother is more concerned with her grandson’s handling of a wooden crucifix, attaching a false gravitas to the thing itself rather than to the ideas it signifies, to the boy’s potential detriment. The youth wins out, however, by skipping school in favour of venturing out to savour Mexico’s unique natural beauty, standing and staring in wonderment. The piece oozes with healthy affection for the country, one that Garcia’s exhausted revolutionaries would have approved of.

The most surprising short is wunderkind Carlos Reygadas’s This Is My Kingdom, an assault not only on the viewer’s senses — pounding music, overdone handheld visuals, shots of people celebrating mindlessly around a bonfire built around a car — but also on the Mexican character, as with the misanthropic Battle In Heaven(2005). In lesser hands, this would not be anything to write about, but that the cinematic genius who made the ethereal Japon (2000) and Stellet Licht (2007) would come up with such a literally unsightly segment disappoints, to put it mildly.