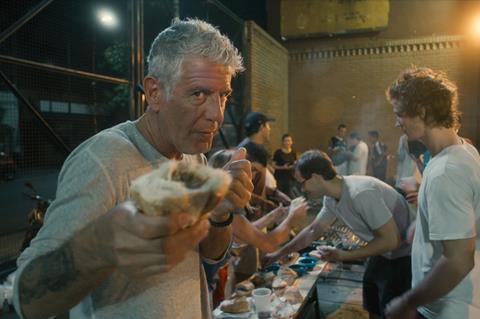 ‘Roadrunner: A Film About Anthony Bourdain’

Anthony Bourdain’s suicide in 2018 haunts Roadrunner, a documentary about the life and death of the celebrated chef and television host. Oscar-winning director Morgan Neville (20 Feet From Stardom) recounts the story of the former drug addict who became a sensation after publishing his memoir Kitchen Confidential, parlaying it into a globetrotting career in which he sampled the world’s cuisine and grew increasingly curious about the cultures he came into contact with. But the film opens with interview subjects pondering how Bourdain’s decision to kill himself fits into that narrative, and indeed Roadrunner wrestles with the gnawing discontent that always resided inside a man who was so beloved.

Roadrunner skilfully tracks the ascent of this confident, poetic soul who had the tattoos and swagger of a frontman but also the sensitivity of a perpetual searcher

Debuting at the Tribeca Festival, Roadrunner hits US theatres on July 16 through Focus Features, providing a handy overview of Bourdain’s legacy which is augmented by observations from his colleagues, friends and even his second wife Ottavia Busia. The film’s professional polish and slick accessibility sometimes come at the expense of probing insight, but those still grieving his suicide should find comfort here.

Incorporating similar techniques he used on the Fred Rogers tribute Won’t You Be My Neighbor?, Neville assembles a wealth of talking heads to help reconstruct the timeline of a revered public figure, emphasising Bourdain’s early rock-star image as a charismatic, edgy New York cook developing his voice as a writer. The success of Kitchen Confidential in 2000, matched with his good looks and outsized ambitions, led to him hosting a series of travel shows, including No Reservations and Parts Unknown — the latter airing on CNN, which also produced Roadrunner. But as his fame increased, he struggled to find lasting happiness, whether in his work or in a home life he barely got to enjoy because of his time on the road.

It would be unreasonable to expect Roadrunner to “explain” what led Bourdain to commit suicide just a few weeks before his 62nd birthday. Neville wisely lets the confusion, sadness and anger of his interviewees sum up the unanswerable questions surrounding Bourdain’s death: ultimately, even those close to him don’t know why he took his own life.

Roadrunner skilfully tracks the ascent of this confident, poetic soul who had the tattoos and swagger of a frontman but also the sensitivity of a perpetual searcher. His longtime TV producers recall how unprepared he was to host his first show, A Cook’s Tour, but once he found his footing and started composing his own voiceover narration, he quickly became a natural. Soon, though, his interest in other countries — he’d never really travelled before A Cook’s Tour — morphed into a desire to highlight the world’s poverty and inequality, expanding the focus of his shows from food into larger issues.

That hunger to learn fed into a personality known for its large appetites, whether for cocaine and heroin in his youth or a workaholic schedule once his TV programmes became hits. A 30-year marriage fell by the wayside because of Bourdain’s relentless travel schedule, and his later courtship of Busia (which resulted in the birth of his only child) proved unable to sustain him either. Not surprisingly, Neville and his subjects view Bourdain’s accomplishments and personal disappointments through the prism of his eventual suicide. Even so, the documentary ably argues that Bourdain was chasing after something ineffable that could fill a profound void within him.

Drawing from archival interviews, as well as clips and outtakes from his shows, Roadrunner makes Bourdain seem shockingly present. But however vibrant he may seem, the film’s familiar rise-then-fall framework can’t help but reduce him to yet another troubled artist who couldn’t outrun his own demons. In addition, his final year — specifically, his tumultuous romance with actress/director Asia Argento — is overly and unconvincingly scrutinised, as if Neville is seeking definitive clues for why Bourdain chose to kill himself. (Argento didn’t participate in Roadrunner.)

Despite those shortcomings, though, Roadrunner conveys the violent abruptness of Bourdain’s end and how that pain hasn’t dissipated for those around him. Eyes full of tears, Neville’s talking heads are often still quite angry at Bourdain, anguished that he didn’t seek help and left his daughter without a father. Roadrunner is smoothly assembled, but it makes room for those unresolved, messy emotions to come pouring out. “You don’t want his legacy to come off as, like, somebody who succumbed to, like, this darkness,” an interview subject says, her composure breaking. That darkness doesn’t dominate Roadrunner, but you can always feel it at the edges.