'Rumble: The Indians Who Rocked The World': Sundance Review 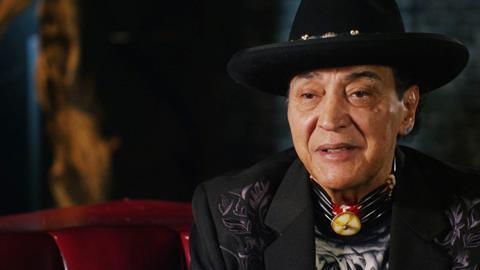 If you are going to field a team of talking heads then you really need them to be first division names. Eye-opening documentary Rumble: The Indians Who Rocked The World duly obliges with a list including Martin Scorsese, Quincy Jones, Buffy Sainte Marie, Iggy Pop, Robbie Robertson and countless others. In the wake of Twenty Feet From Stardom, Rumble also seeks to reclaim the lives of influential, undervalued individuals from official music histories in which they have become all but invisible.

The combination of social history and music industry memories is carefully designed to draw in the casual viewer who might be attracted by the high profile names but stay to discover the bigger picture.

It is more scattershot in its approach and less emotional than its high-profile predecessor but Rumble still has great stories to tell and causes to champion making it irresistible for popular music lovers.

Inspired by the Smithsonian Institution exhibition “Up Where We Belong: Native Musicians In Popular Culture,” director Catherine Bainbridge begins by informing us that in 1907 the American government dispatched ethnologists to record Native American music. They believed that none of it would survive and it may already have been too late. Bainbridge makes a convincing case that Native American influences have been hiding in plain sight for the best part of a century. You can trace the lineage of blues, rock, jazz and even heavy metal back to the sounds and rhythms established long ago by Native American tribes.

Throughout the film Bainbridge is able to assert that behind virtually every groundbreaking star in American music there is a Native American whom the world has been allowed to forget. She begins by saluting the aggressive guitar sound of Link Wray, the “Father Of The Power Chord”. Steve Van Zandt pays tribute to the first Native American rock star whose track Rumble sold over a million copies and is described as “the theme song of juvenile delinquency”.

Bainbridge thoughtfully balances old war stories from the star names with archive footage and interviews that provide a substantial historical context that stretches from the shocking slaughter of ghost dancers at the Battle of Wounded Knee to the legacy of genocide, oppression and violence that has shaped Native American lives. Robbie Robertson recalls being told: “Be proud you’re an Indian but careful who you tell.”

That combination of social history and music industry memories is carefully designed to draw in the casual viewer who might be attracted by the high profile names but stay to discover the bigger picture. There is some great archive footage as the Rolling Stones perch at the feet of Howlin’ Wolf during a 1960s television recording. Ultimately, what really hits home is the people brought back into the limelight, from the grandfather of the delta blues Charley Patton to jazz singer Mildred Bailey, much admired by Tony Bennett, and Redbone whose Come And Get Your Love memorably featured in Guardians Of The Galaxy.

The whole film is a lively lesson in music history that should stimulate renewed interest in Native American artists and convince other documentary filmmakers that there is still much more to explore.