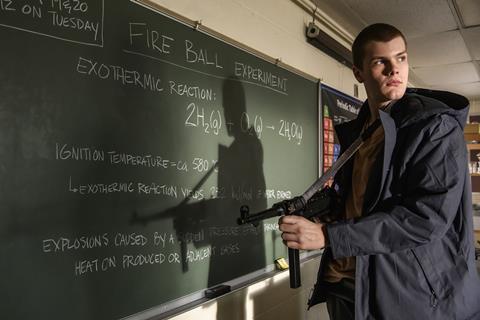 Just because we have all become used to school shootings as an established feature of North American life, that doesn’t mean that the world is yet ready to see the theme used as the basis of genre entertainment – and perhaps it never should be. The topic has been treated with measured seriousness in some fiction films: Gus Van Sant’s Elephant, Denis Villeneuve’s Polytechnique and Lynne Ramsay’s We Need To Talk About Kevin. But Run Hide Fight is not that kind of film. An unapologetic old-school exploiter going full on for thrills and suspense, it’s undeniably polished and energetic, and features a couple of strong performances from young stars Isabel May and Eli Brown – but it feels fundamentally tasteless, indeed just plain wrong. Unfortunately, it will probably do extremely well at the box office.

There are lapses of both taste and dramatic tension

Genre specialist Kyle Rankin (Infestation, The Battle of Shaker Heights) focuses his story on high schooler Zoe Hull (May, from Netflix’s Alexa and Katie), who has gone into sullen psychological retreat following the death of her mother from cancer. After a morning learning to shoot deer with her ex-military dad Todd (Thomas Jane), Zoe heads to school with her best friend Lewis (Olly Sholotan), the two intelligent, vulnerable outsiders bonded by their alienation from their conformist peers as graduation and the school prom approaches.

A more or less normal day, at first disrupted only by jokey prom preparations, is brought to a brutal halt when the school is invaded by four armed students on a murderous mission, headed by intelligent, narcissistic, ruthless Tristan (Eli Brown). As the shooting starts and blood starts to flow, Zoe is lucky to get out of the school alive following a tense escape – but then has a change of heart, and heads back inside the building to rescue as many staff and students as she can. Meanwhile, Lewis is co-opted by Tristan to livestream his reign of terror – a currently mandatory satirical sideswipe at the effects of social media (Zoe is identified as a strong-minded lone wolf by virtue of her refusal to use a cellphone).

A guerrilla variation on horror cinema’s Final Girl archetype, Zoe uses her smarts and survival skills to stay alive and to attempt to outsmart the killers. She does this partly with the help of her dead mother who appears to her, in a somewhat excruciating thread, as a solicitous ghost, played with oddly arch mannerisms by Radha Mitchell. Meanwhile, the obnoxious but oddly charismatic Tristan plays psychological games with his victims and broadcasts his grandiloquent rhetoric to the outside world, in a style seeming inspired by Heath Ledger’s Joker in The Dark Knight; and it’s a tribute to Eli Brown that he manages to impress in a role that’s not only so unlikeable, but so thinly and conventionally conceived (albeit quite snappily written on the level of snarky rhetoric). May is also good, giving determination and muscularity to an otherwise 2D kick-ass role gussied up with off-the-peg psychological motivations. Treat Williams, as the tough local sheriff, and horror film stalwart Barbara Crampton are also reliably on hand as adult support.

Conceived with some tautness and efficiency as an action thriller, the film never makes us care about most of its characters, largely treating the crowd as disposable bystanders. There are lapses here both of taste and of dramatic tension – the latter when Zoe implausibly sits down to talk things through with the most human-seeming of the attackers, the former when Tristan coldly indulges in sexual humiliation of a female teacher. What’s finally most depressing about the film is its duplicity. Yes, it pays lip service to positive representation, with its strong female protagonist and her sensitive African-American best friend (nicely played by Sholotan) pitted against macho dorks and WASP conformity. And, yes, it appears to say that guns and gun culture are a terrible thing. But conversely, by the end, it also suggests that a weapon in the hands of an upstanding concerned citizen – for which read ‘vigilante’ – can be altogether laudable. And in this tinderbox year in American history, that is a very worrying suggestion indeed.