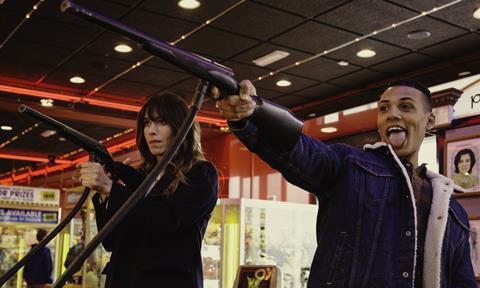 One hotel, the Metropole in Scarborough, plays host to the secret trysts of two couples whose stories seem to mirror each other. Reserved, cautious Liz (Jodhi May) is holed up in a sea-facing suite with her much younger lover Daz (Jordan Bolger), a sixteen-year-old who is play-acting the role of being a man as if it’s a game with no consequences. There’s a similar age gap between Aiden (Edward Hogg) and Beth (Jessica Barden), a feisty teen who is still fizzing with the adolescent exuberance of a girl who has yet to be disappointed or betrayed. While the film struggles to fully disengage from its theatrical origins, it is an intelligently slippery study which positions the audience in the grey area between empathy and complicity.

Intriguing, and at times unsettling, the film poses moral and ethical conundrums which could prompt heated discussions – as such, it lends itself to the forum of the film festival. The intimacy of the piece means that it should play as well on the small screen as in the cinema, so, while the film could attract interest in the arthouse circuit, distribution through a VOD platform might work equally well.

The well-chosen location is one of the film’s main assets. The musty grandeur of Scarborough, a North Yorkshire resort town still clinging to its reputation as a holiday mecca for the Victorians, is a distinctive back drop – in fact, the film could have benefitted from showing more of it. There’s something about the pearl-clutching propriety of Victorian architecture which underlines the transgressive nature of the two relationships.

And as examples of Victorian architecture go, there are few more imposing than the Grand Hotel (renamed for the film as the Metropole). A grand-dame of a building, it looms disapprovingly over the seaside town beneath it. It’s a hotel which is full of history; some of which we only learn of in a final reveal. But the camera hints at this, lingering on a door latch covered in the smeared prints of the numerous past fingers.

The parallels between the two relationships are emphasised by the use of the same dialogue for both during mirror-image opening scenes. Gradually the stories diverge a little, but there are repeated shared plot points which act as bridges between the two sets of couples. Both of the older partners are teachers; their lovers are also their students. The younger partner in each couple tends to be uninhibited, full of youthful certainties and profligate with declarations of love. The older two are more circumspect, although we do not doubt the depth of feeling with which they are wrestling.

But in both cases, that feeling is tainted with guilt – infidelity is a silent partner in both relationships. And it’s perhaps because of this, and the ruptured teacher-student bond of trust, that it is quite a challenge to find sympathy for the two older characters, however genuine their emotions.

It’s tempting to try to unpick and dissect the film’s final reveal. But those who chose with go with it are rewarded with a poser of an ending which, depending on your perspective, suggests themes of either repeated behaviours or cycles of abuse.

Screenplay: Barnaby Southcombe, from a play by Fiona Evans