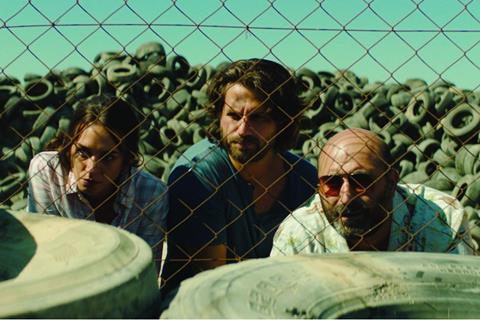 One man’s best laid plans unravel because of his unstinting devotion to his dog in Smuggling Hendrix, a laidback charmer of a feature debut from writer/director Marios Piperides. The droll comedy, understated political commentary and an adorable scene-stealing canine all contribute to the appeal of a likeable film that might attract the same modest audience who warmed to Bombón: El Perro (2004) or Truman (2015).

An amiable affair that gradually grows on the viewer

The unfamiliar setting of Cyprus and the island’s intractable divisions bring a good deal of added heft to this picaresque shaggy dog story. Deep in debt and dumped by his girlfriend, failed musician Yiannis (Adam Bousdoukos) has decided to sell his possessions and leave Cyprus for a fresh start in Holland. The film begins on a Thursday, with three days remaining before his departure.

Counting down the days, Smuggling Hendrix charts the escalating consequences from one random twist of fate. When Yiannis beloved dog Jimi runs away from the Greek Cypriot side of Nicosia to the Turkish-occupied side of the divided city, Yiannis has no choice but to follow. He eventually rescues the dog but now finds himself at the mercy of absurdist regulations that forbid the transport of live animals from one part of the island to the other. Yiannis’ passport allows him to return home, but Jimi is obliged to stay put.

Smuggling Hendrix is an amiable affair that gradually grows on the viewer. Adam Bousdoukos’s Yiannis is a shambling loser who wanders around looking like an unmade bed. He retains our sympathy throughout as an ordinary man caught up in extraordinary times. The film’s humour is dry and punctuated by wry non-sequiturs and random one-liners, including a security guard shocked to discover that Karate Kid Ralph Macho has now reached the grand old age of 55.

The rubble strewn streets of Nicosia make for an attractive location and the numbers of scenes set in the night time shadows almost lends a film noir look to the proceedings. Radio news reports tell of the attempts to broker a peace settlement between Greece and Turkey, and there are constant flare-ups that reveal the animosity between those who are victims of a Turkish occupation that has lasted more than four decades.

That political dimension is never overplayed but serves to explain the simmering local tensions, compromised sense of identity and the disappointments of the individuals at the heart of the story. The message of what can be achieved by working together adds to the film’s upbeat tone.

The true star of the film inevitably is Jimi, a dog with boundless energy and irrepressible personality. His presence makes you understand exactly why Yiannis would go to such great lengths to be reunited with him.