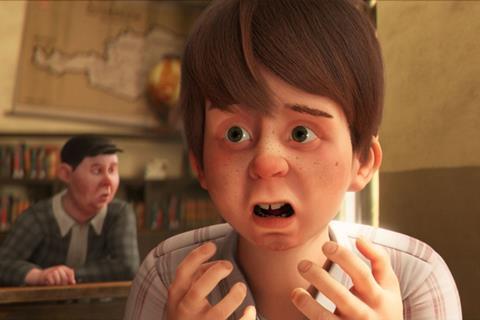 The life, art and the distinctive aesthetic of cult Austrian cartoonist, satirist and musician Manfred Deix is captured in Snotty Boy, a semi-grotesque coming of age story set against the backdrop of ultra-conservative small town Austria. Snotty Boy (Markus Freistätter) is the name bestowed upon the central character (based on Deix), and snot, pus, shit and other bodily substances run freely through this robustly earthy comedy. Taking its visual cue from Deix’s work – he favoured fleshy physiques and zeroed in on imperfections – the film confronts the repulsive aspects of humanity head on: both in the freakish physical quirks, and in the undercurrent of Nazi sympathy which lingers on in this pocket of 1960s Austria. As such, it may not be for everyone.

But fans of Deix – and there are many – may surely embrace this full-bodied animated appropriation of his spirit. The film should play best in territories where Deix’s popularity will be a selling point and where his lederhosen and lard aesthetic is regarded with affection. Following on from its premiere in Annecy competition, the film will close the Munich Film Festival before being released in Austria by Filmladen and in Germany by Pandora Film. Whether the very specific appeal of Deix is strong enough to travel further afield remains to be seen.

It’s fair to say that Deix saw the worst in people. His characters seem to be permanently drawn from the most unflattering angle; all gaping mouths, pendulous jowls and piggy lashless eyes. Deix must be one of the only artists to use something as bland as watercolour painting as a brutally devastating weapon. His alter ego, the eponymous “Snotty Boy” doesn’t escape the savagery of the style. Gormless, slack jawed and given to leering at the over-inflated curves of the new butcher’s girl, he’s pretty much the full package of unimpressive Austrian male adolescence with just his gift for drawing to set him apart. His best friends include an opportunist hustler with exploding acne and a slow witted lumbering oaf.

But the kids are considerably more appealing than the adults in this repressively Catholic community. Bulging fat-berg faces and guts swimming with beer and bile, they drink themselves bitter and blurry in the inn run by Snotty Boy’s decent but browbeaten father. In this small-minded community, anything or anyone different is treated with suspicion. And free-spirited gypsy girl Mariolina (Gerti Drassl), who hawks carpets with her vampy mother from the back of a truck, is certainly different. Snotty Boy is smitten. A compulsive and talented doodler, he draws her portrait on beer mats and napkins. His other artistic output is less romantic – he draws pornographic sketches of the butcher’s assistant and sells them to his schoolmates.

Diex himself serves as art director on the film, and the design takes a little getting used to. Hyper-detailed 3d computer animation needles into the flaws of the characters and their world. But it’s also meticulously and wittily detailed and. like Deix himself, confrontationally iconoclastic, fearlessly tackling religious and social mores, and skewering hypocrisy and bigotry.