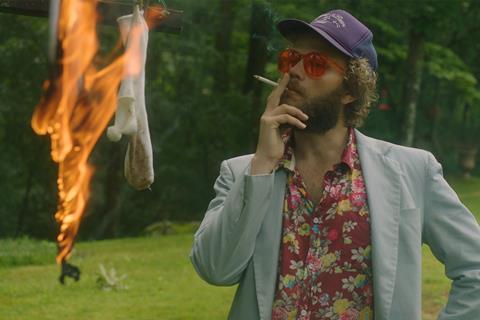 Bo McGuire aims for the personal and the poetic in Socks On Fire, a heartfelt documentary that examines his fractious family and his place in it. With his feature debut, McGuire investigates the falling-out that occurred between his Aunt Sharon and Uncle John — two seminal forces in his upbringing — once their mother died and the depth of Sharon’s homophobia towards her gay brother became evident. Socks On Fire is playful, mixing real people with actors, but it’s also melancholy, as this queer filmmaker explores his sexual identity in relationship to the battles that have torn apart the people he loves.

The recipient of the Best Documentary prize at this year’s Tribeca Film Festival, Socks On Fire now screens as part of IDFA. Strong reviews will boost awareness, and the film should certainly strike a chord for those LGBTQ+ viewers who have had their own rocky times with close-minded family members.

Early on, McGuire introduces his documentary’s probing, somewhat impish tone by filming himself, dressed in a fabulous mink coat, as he walks dramatically toward his family’s house — opening the front door to let an actress portraying his beloved late grandmother Nanny (Carron Clark) come outside. This interplay of recreation and reality is central to Socks On Fire, which tells the sad story of what happened after Nanny’s death. The matriarch left behind no will, setting the stage for her daughter Sharon to disobey her mother’s dying wish: that Sharon’s brother John get the house. As McGuire learns in his interviews with relatives and family friends, Sharon preferred that John, who is gay, be homeless.

Often appearing on camera and occasionally heard in voiceover intoning poetry about the tensions in his family, McGuire shares with us his deep childhood bond with Nanny, Sharon and John, which makes it all the more difficult for him to understand why Sharon tried to ostracise her brother. The film, developed from a 2018 short, allows McGuire to express his love for Sharon who, when he was a boy, was a lively, independent presence, helping to inspire a gay kid to find his own voice. (At one point, McGuire states that, as a boy playing with Barbies and being teased by classmates, he longed to be a combination of Sharon and John.)

Despite growing up in the conservative American South, McGuire had a community of allies within his family — including the adoring Nanny and his own supportive mother Susan — but as Sharon got older, something changed, causing the riff that led to John being drawn into a legal dispute with his sister.

But Socks On Fire is the furthest thing from a courtroom drama. Rather, it’s McGuire’s ambitiously mediative quest to make sense of this emotional trauma. Consequently, the film possesses a restless, meandering spirit, moving from traditional on-camera interviews to scripted sequences to spoken-word interludes to home videos. McGuire casually blends forms, occasionally talking to the actors playing his family about the real people. In an especially sly move, he casts a male actor, Chuck Duck, to play the adult Sharon in drag — an attack on her homophobia but also an acknowledgment that John is himself a drag queen. (Perhaps not surprisingly, Sharon did not participate in McGuire’s film.)

Sometimes, McGuire’s flair for the dramatic can feel overheated, trying to elevate this personal saga into an epic tragedy. But if the filmmaker’s intense connection to the material can understandably distort his perspective, it also allows for a sympathy toward his subjects that gives viewers a rich portrait of an imperfect, complicated family. Sharon is ostensibly Socks On Fire’s villain, but McGuire shows her compassion as well. His heart bursts for these people — even those whose bigotry has wounded McGuire and those who mean so much to him.