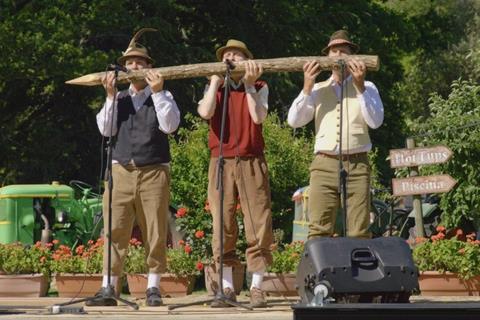 Villa Baviera looks like a little piece of heaven on earth. Nestled at the foot of the Andes Mountains in Chile, it is a beautiful, sun-dappled spot of inviting tranquility. Songs Of Repression pulls aside that curtain to explores its past as the infamous Colonia Dignidad, a German community marked by abuse, religious fanaticism and complicity in the worst atrocities of the Pinochet regime.

Estephan Wagner and Marianne Hougen-Moraga’s eye-opening documentary avoids sensationalism to offer a measured, sympathetic approach to the emotional toll on the survivors of Colonia Dignidad as they struggle to come to terms with the past. The intriguing subject matter and thoughtful insights should ensure continued interest after its CPH:DOX online premiere, especially after its win in the competitive section.

Filmed over 18 months, Songs Of Repression carries a sense of the filmmakers becoming immersed in a community and gaining their trust. Around 120 inhabitants of Villa Baviera are survivors of the Colonia Dignidad period and include both victims and perpetrators of the cult that flourished under Paul Schafer between 1961 and 1997.

This is very much a film of contrasts. Wagner and Hougen-Moraga capture some beautiful images of Villa Baviera as it basks in sunshine and offers a warm welcome to tourists. It seems idyllic as we watch residents tending to bee hives, cultivating herb and vegetable gardens and receiving medical treatment. There is even a care home for the elderly. Who could resist such a sanctuary, especially in these difficult times?

The contrast comes in conversations with residents who are unguarded in discussing what they once experienced. There is testimony of the harsh discipline under Schafer, his systematic abuse of the boys, beatings, punishments and the obligation to sing songs expressing harmony and solidarity among the residents. The treatment of women carries strong echoes of The Handmaid’s Tale.

Wagner and Hougen-Moraga eschew the traditional elements of a documentary looking to illuminate the past. There is no footage of the Schafer years at Colonia Dignidad; no home movies, newspaper headlines or television reports; no photos of Schafer and his fate. He was eventually tried and convicted, ending his days in jail. Clear, concise on-screen titles provide information and context. Their focus is on the here and now and the legacy of his reign. Close-ups scrutinise residents and capture the churn of emotions that are only now beginning to be voiced and shared. Raised to follow orders and respect the order, they are still learning to question and challenge. The sense of disappointment, betrayal and growing outrage is palpable.

There are moments that catch at the throat. There is a suggestion of establishing a Women’s Group. Helga is astonished to discover that sex could be an expression of love, rather than obligation or control. The concept had never occurred to her. We also see the construction of new facilities for tourists in gloomy basements and areas that were once used for torture.

There is nothing cut and dried about Songs Of Repression. Some veterans of Villa Baveria prefer to forgive and forget. Some are nostalgic for the good old days and claim that Pinochet is much misunderstood. Others are clearly damaged. Their continuing anguish is at the heart of a poignant, sensitively handled documentary.