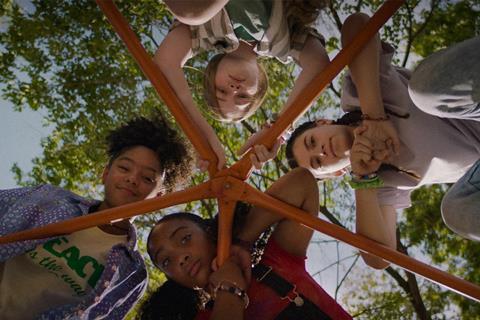 Eleven-years-old and on the cusp of moving up to middle school, four close friends embark on an adventure during the final week of their summer holiday. The discovery of a man’s body near the river is the impetus for a journey in which innocence is lost, but the bonds of friendship are cemented. The latest picture from James Ponsoldt is a coming of age drama which brings a female-led freshness to some undeniably dark elements, and wears its thematic similarities to Stand By Me lightly.

The film’s premiere in Sundance’s Kids section marks a return for Park City regular Ponsoldt (Smashed, The Spectacular Now, The End of the Tour); all but one of his features – 2017’s The Circle – have screened at the festival. Although Ponsoldt has previously explored stories focused on young people – The Spectacular Now looked at a relationship between high school aged teenagers, for example – Summering marks a departure in that it is targeted firmly at the family audience; albeit the older end of the childhood spectrum. At times slightly spooky in tone and prepared to delve into the uncomfortable uncertainties of pre-adolescence, the film has a tonal kinship with David Oyelowo’s Netflix title The Water Man and with the junior-genre scares of Stranger Things. Acquired by Bleecker Street for the US, and by Stage 6 for the rest of the world, the picture is presumably destined for a theatrical release but, equally, it could comfortably work as a VOD title – it’s tailor made sleepover viewing for kids aged 10 and above.

Key to the film’s appeal is the way that the friendship between the four girls, Dina, Lola, Daisy (Lisa Barnett), and Mari (Eden Grace Redfield), is persuasively brought to life. Before the discovery of the body sets them on a new path, the leisurely, snaking camera follows them as they wander; eavesdropping on conversations which range from hopes and fears for the future to the question of whether or not skirts are a form of patriarchal oppression.Chief among the fears is the question of what lies before them as they take the first steps towards adulthood, and whether this bond of friendship that they all regard as precious right now will turn out to be a lasting part of their lives.

They have other, individual, concerns. Daisy misses the father who left without saying goodbye, and the mother (Lake Bell) who has retreated into work and sadness. And Mari must negotiate an overprotective mother and the transition to a strict faith-based school.

The body of the man – found lying prone near to a secret tree where the girls have tied their childhood treasures – is not quite a MacGuffin but is not, ultimately, as central to the story as one might expect. Like Stand By Me, the film is more preoccupied by the challenges facing the living characters than it is with the fate of the dead one. And although it doesn’t overtly mention Covid-19, there is an implicit acknowledgement that the already fraught journey from childhood to adolescence, with all the potential and the pressures which accompany it, now comes with an added layer of anxiety thanks to the pandemic.