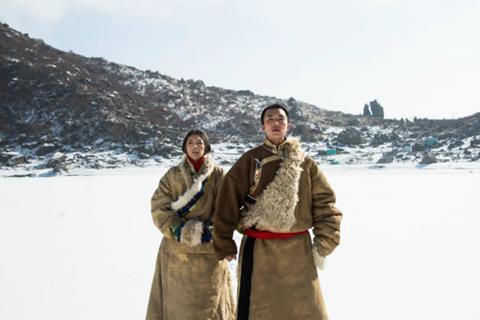 Sunshine That Can Move Mountains

A film steeped in nature’s splendour, sensitive to life’s ebbs and flows, and striving to convey the everyday realities of rural Tibetan existence, Sunshine That Can Move Mountains proves a handsome debut for Chinese writer/director Wang Qiang. Here, stunning mountain vistas provide a picturesque constant in an engaging tale of faith and tradition, as a Buddhist monk is caught between his sacred calling and secular temptations.

Likely to continue its tour of the festival circuit, Sunshine centres around a monk-in-training since childhood, 24-year-old Tenzin Banjue (Tenzin Jigme). He is well regarded, both in the Lhasa temple he calls home and in his family’s village located several days’ trek through the mountains. His life resides solely in the former until his younger brother falls into a vegetative state and Tenzin is given permission for a two-week visit. The journey is long and arduous and, upon his arrival, his mother decides that he shouldn’t leave. There’s domestic matters to attend to, including a neighbourhood argument about a missing yak involving the father of his brother’s fiancée Drolma (Sonam Droga) — not to mention the notion that Tenzin should marry Drolma should the worst transpire.

Complicating matters is the film’s most clichéd inclusion: Tenzin’s growing fondness for Drolma, even though it contravenes his monastic ideals. When nature prolongs his stay, their bond only solidifies as the pair watch over the man lying comatose between them. Thankfully, Qiang is subtle with his account of chaste, complicated yearning, mostly letting his characters connect over the minutiae of everyday life rather than through anything more contrived, though the weather always lingers as a threatening force.

Unaffected performances, as particularly evident in the restrained but resonant chemistry between Jigme and Droga, help patch over anything that flirts too strenuously with formula or familiarity — the interference of Drolma’s wealthy former suitor, who has his own family medical problems but promises to build a monastery for the community, for example. And although Sunshine That Can Move Mountains falls victim to the use of overly literal lyrics in its accompanying music, that proves one of the film’s rare overstated touches.

Indeed, for much of its patiently composed and compiled running time, with Qiang editing alongside Xie Peng, the feature finds drama as well as wisdom in gently surveying its sights —whether honing in on the routines and traditions of Tenzin’s village or depicting its characters prostrating against earthen floors and icy paths. Every shot of snow-dusted peaks resounds with both aesthetic and thematic reverence, as do the images intimated by the film’s title, but wholly earned in its narrative: of sunshine streaming over the mountains.