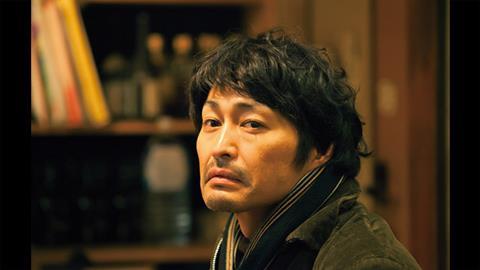 The Actor is an existential drama about the roles life forces us into, and our illusions of control.

The film provides a tasty vehicle for Ken Yasuda, who like his character has done everything from anime voicework to TV series to small film roles, but never really broken into the big time. The Actor should change that, as well as continuing the career rise of Yokohama, one of Japan’s most promising female directors, whose Bare Essence of Life (2009) put her on the international festival radar.

But The Actor brings a few original cards to the table. There’s a clear-eyed but also affectionate and humour-tinged understanding of the jobbing actor’s craft, disorienting schedule and creative frustrations. There’s also a nicely understated meld between man and roles, a gradual, sake-fuelled dissolution of borders between what actor Takuji Kameoka plays and what he’s played by, that turns The Actor into an existential drama about the roles life forces us into, and our illusions of control.

The Actor looks sure to get further festival attention after its Tokyo International Film Festival debut. In other markets it will hit the hurdle faced by a country identified abroad mostly with yakuza and anime genre fare whose more serious indie titles are all but invisible. But that said, with its kooky soundtrack, cool hipster appeal and delicately played love story it’s not unthinkable that a few distributors targeting committed cinephiles might rise to the challenge.

Based on a novel by well-respected local writer Akito Inui, but bearing none of the hallmarks of the prestige literary adaptation, the story is structured around two long scenes set in a tiny bar in a small provincial town somewhere in Japan’s cold north where Takuji Kameoka, the almost permanently inebriated but genial and high-functioning actor played by Yasuda, has a bit-part in a yakuza film.

Behind the counter is single mother Azumi (Kumiko Aso), whose luminous beauty and gentle humour immediately strikes Takuji. As the drink-nursing actor is persuaded to taste the agar seaweed jelly that is the speciality of the region, and as the two watch the television in the corner, commenting on food and travel programmes, or a news story about astronaut Kim Nowak’s arrest for a crime of passion, a connection forms – or Takuji imagines it has. Much later he returns, on a motorbike, through a back projected landscape, to a second meeting with Azumi, which is a melancholy mirror of the first.

These two finely pitched scenes are moments of stillness, and focus, in the woozy, hazy daydream that is the rest of Takuji’s life. A respected character actor, he’s praised by directors for his instinctive craft, but this doesn’t seem to push him up the career ladder. He obligingly lets himself get beaten up, shows a young wannabe star how to drop dead (easy: you just drop dead) and even falls into a moat in a period martial arts film in a move which director and crew hail as a piece of inspired impro, but actually has more to do with the fact that he’s so drunk he can hardly stand up.

Present only as a voice on the phone, his agent treats him like a wayward child, but the flow of work she brings seems constant – including a stint with an avant-garde theatre company that puts Takuji through the Method mill of voice exercises and body work.

It’s at this point of maximum parody – interleaved with other in-jokes, one about a cult Spanish director called Alain Spesso whose next film Takuji auditions for, another about a Korean genre flick whose title translates as Acorn Pussy – that The Actor loses its way a little, not just in the interesting, in-character way it’s been meandering up to now.

But the film gets its mojo back in time for the touching finale, and the director’s control of tone – a sort of hopeful comic fatalism – never falters. The spectre of sentimentality is warded off not only by Takuji’s alcohol-induced insulation against self-pity, anger or any other emotion – something which makes his barroom epiphany all the more moving – but also by an often bizarre soundtrack, which mixes up tinny electric keyboard numbers that remind us of 1970s European kids’ TV series, Michel Legrand riffs and cool smoky-dive jazz numbers.

Screenplay: Yokohama, based on the novel by Akito Inui